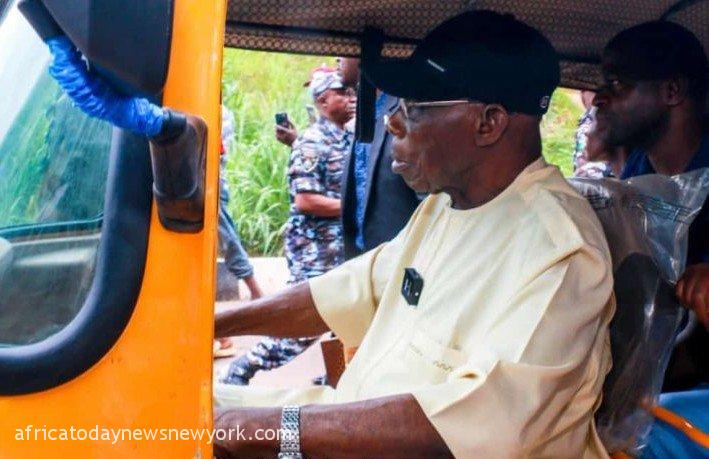 One of the Former Presidents of Nigeria, Olusegun Obasanjo, in a bid to promote one of his initiatives was behind the wheels of a tricycle (Keke) on Saturday.

Olusegun Obasanjo had rode through some roads in Abeokuta, the capital of Ogun State to pick up some passengers.

The sight had also caught the attention of many who cheered the former Head of State and also took photos. The elder statesman, had offered rides to citizens, moved through Moshood Abiola, NNPC Mega Station, Kuto Market, among others.

The activity was part of OBJ @ 85 Free Keke Programme of the Youth Development Centre of Olusegun Obasanjo Presidential Library (OOPL). In his remarks, Obasanjo appealed to the youths not to leave Nigeria to those messing it up.

The ex-leader said despite the challenges, they should try to take advantage of available opportunities to make an impact.

“Things are not what they should be but youths, individually and collectively, must make contributions in order to make things the way they should be.

“If you leave things to those who are messing it up for you and who are saying you are the leaders of tomorrow, you will never have that tomorrow.

“God has given you innate ability to be what He wants you to be. If you make up your mind, God will help you and provide people who would help you”, he added.

In a recent announcement, the Peoples Democratic Party (PDP) has also given the former President of Nigeria, Olusegun Obasanjo an ultimatum of 24 hours to clarify his recent remarks where he stated that he regretted picking Atiku Abubakar as vice-presidential candidate.

Obasanjo had remarked that picking a running mate in 1999 was one of the mistakes he has made in his life.

“One thing that has happened to me is that God has never disappointed me and that is very important. For instance, one of the mistakes I made was picking a number two when I was going to become president,” Obasanjo said.

Atiku Abubakar who is the PDP presidential candidate for the 2023 presidential election, had been the vice-president to Obasanjo from 1999 to 2007.