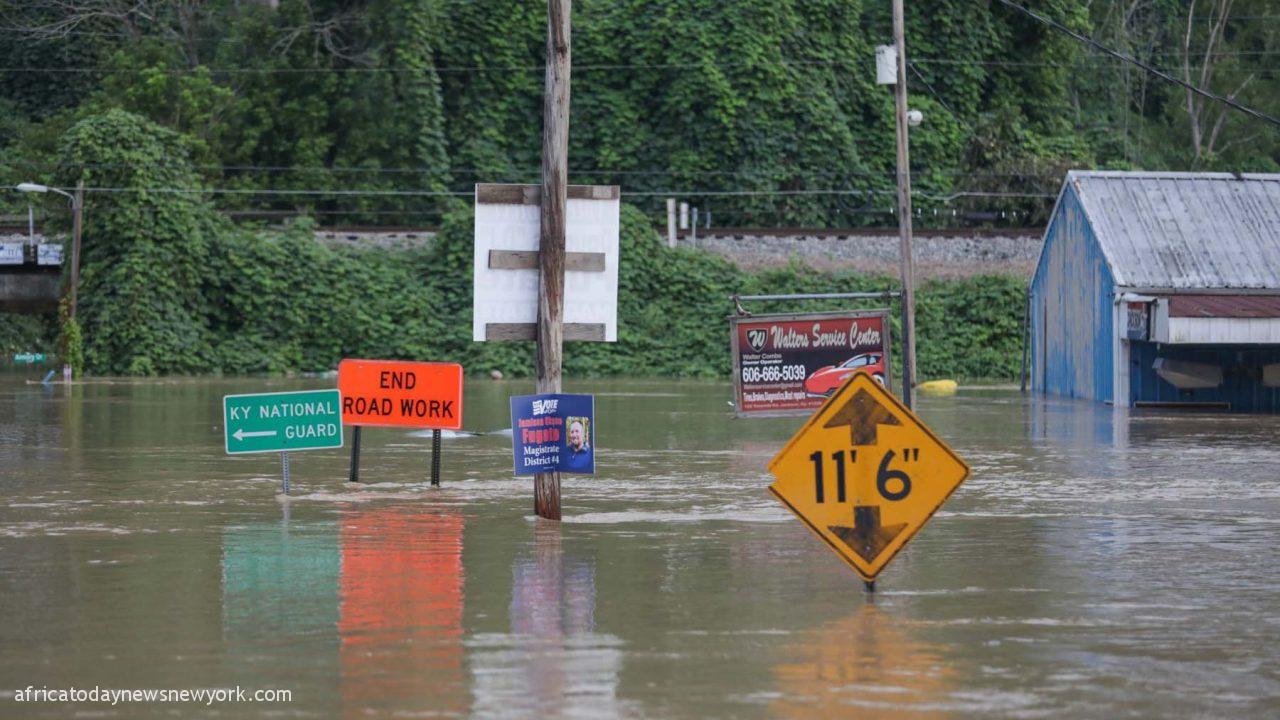 The Governor of Kentucky announced yesterday that 25 people have died as a result of devastating floods, and that number is certain to climb as rescuers and locals resumed their gruelling search for survivors.

Finding survivors is challenging because cell phone service has been hampered in that mountainous area, which has been heavily struck by grinding poverty as the coal sector fades.

‘I’m worried we are going to be finding bodies for weeks to come,’ Governor Andy Beshear said in a midday news briefing, shortly after tweeting that the death toll had risen to 25.

The Democratic governor confirmed that ‘we are still in the search and rescue phase,’ saying, ‘We will get through this together.’

Beshear said an earlier report that six children were among the dead was inaccurate; two of them had turned out to be adults.

The children, US media reported, were lost in a heart-rending way. Members of a family, clinging to a tree after a fast-rising stream had engulfed their mobile home, saw their children torn from their grip, one after another, by powerfully surging waters.

Beshear said national guard units from Kentucky, Tennessee and West Virginia had made more than 650 air rescues since the flooding began Wednesday evening, while state police and other state personnel had registered some 750 water rescues.

He said the search was ‘tremendously stressful and difficult’ for rescue teams.

Some areas in eastern Kentucky had reported receiving more than eight inches (20 centimeters) of rain in a 24-hour period.

The water level of the North Fork of the Kentucky River at Whitesburg rose to a staggering 20 feet within hours, well above its previous record of 14.7 feet.

The flooding turned many roads into rivers, and some houses in low-lying areas were almost completely submerged, with just their rooftops visible.

Scenes on social media showed houses ripped from their moorings and deposited amid masses of debris along turbid waterways or even atop a bridge.

The weather offered a respite on Saturday, but more rain was expected the following day, with one to two additional inches expected.

Beshear told CNN on Saturday that the impending rain posed a challenge, and ‘while we don’t think it’ll be historic rain, it’ll be hard.’

He said during the briefing that 15 emergency shelters had been opened in schools, churches and state parks, though at least one had been ‘overwhelmed.’

Some 18,000 homes remained without power, Beshear said, and thousands were without safe water supplies.

The governor said the Federal Emergency Management Agency had sent 18 tractor-trailers of water so far. Other federal workers were arriving to process claims.

The eastern Kentucky flooding is the latest in a series of extreme weather events that scientists say are an unmistakable sign of climate change.

Nearly 60 people were killed in western Kentucky by a tornado in December 2021 — a disaster that Beshear said offered lessons for current efforts on the other end of the state.