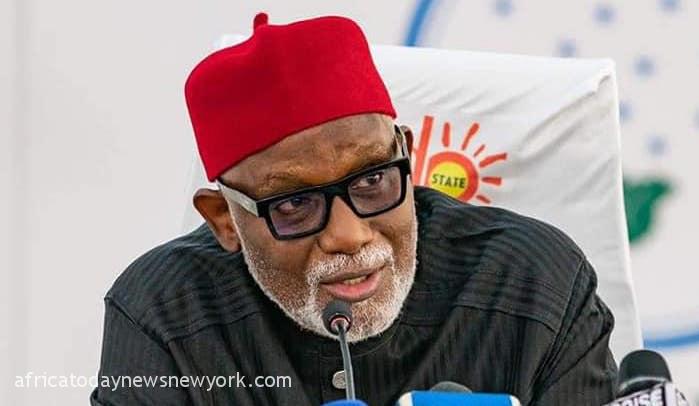 Mr Oluwarotimi Akeredolu (SAN) who is the Ondo State Governor, has finally come out to confirm the arrest and detainment of some five suspected individuals who have been pinpointed as the attackers of St Francis Catholic Church, Owo which had left 40 people dead.

Governor Akeredolu’s confirmation is also coming on the heels of the Chief of Defence Staff (CDS), General Lucky Irabor’s announcement in Abuja.

Akeredolu who had spoken during a courtesy visit to his office by the leadership of the Nigeria Union of Journalists (NUJ), led by the state Chairman of the Council, Mr Leke Adegbite, noted that government did not spare a moment in trailing the terrorists since the horrendous attacks.

He said: “Now that the military has announced it, I can tell you that five of them have been arrested now. They are still on the trail of the rest. The home where they lodged in Owo and the person that accommodated them before the attack, has also been arrested.

“We did not spare a moment. I am happy that the Chief of Defence Staff has announced it. We have known for a while but we needed not to come out with it because more works are still ongoing. I can confirm that this arrest has been made. And they are still on the trail of some of them.”

The governor of Ondo State and Chairman of the Southern Governors’ Forum, Oluwarotimi Akeredolu has condemned the bandits’ attack on President Muhammadu Buhari’s convoy on Tuesday in Katsina State describing it as ‘daring’.

The country’s security situation has continued to worsen at an alarming rate over the last twelve months. According to Akeredolu, the act by the bandits as daring and should not be taken for granted.

The governor made this statement on Wednesday when hosting some of his former classmates from the Loyola College, Ibadan class of 1968–1972 in his office in Alagbaka, Akure, the state capital.