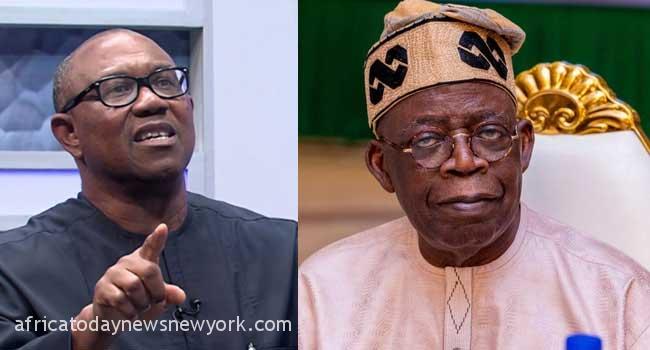 The presidential candidate of the All Progressives Congress (APC), Bola Ahmed Tinubu, and his Labour Party (LP) counterpart, Peter Obi have gone to a war of words following efforts by supporters of the various political parties to use social media as a key battleground and sway public opinion in favour of their preferred candidates.

Africa Today News, New York reports that in recent months, supporters of the many presidential contenders in the nation have taken to the social media platforms in a degenerate form of political debates, engaging in invectives, mudslinging, and name-calling with sharp vituperations.

Tinubu implored Obi to tell his supporters to stop propagating falsehood and disparaging him and other presidential candidates for the 2023 presidential poll.

He said certain activities by members of the ‘Obedient’ Movement on social media were proof that Biafra campaigners and Obi’s supporters are the same.

However, hitting back at Tinubu, Obi described as the height of mischief the attempt by the APC standard bearer to link his campaign to Biafra and the Indegenous People of Biafra (IPOB).

Tinubu, who spoke through his director of Media and Communications, Bayo Onanuga, had advised Obi and his supporters to allow the electioneering process to be issue-based, such that would advance the growth, progress and stability of the country.

He said Nigeria would be better off ‘and the electoral process will be enriched if the 2023 presidential campaign sticks to issues of good governance that will lift millions of Nigerians out of poverty rather than being dominated by the ravings of guttersnipes, who do not wish the country well.’

In a statement he issued yesterday, Onanuga noted that it became necessary for the Tinubu Campaign Organisation to appeal to Obi to rein in his supporters after investigating the origin of the fake report claiming that the Ghanaian President, Nana Akufo-Addo wrote a letter to Tinubu, asking him to support Obi and take care of his health.

Onanuga said the president of Ghana had debunked the fake news as a product of deliberate mischief with the intent to deceive the public.

He quoted the Ghanaian president as writing in his official Twitter account: “I have written no such letter to the APC leader, and it will not occur to me to do so. Ghana and Nigeria boast of decades of cordial, strong and brotherly relations, and I am not going to be the one to interfere in the internal affairs and politics of Nigeria.”

The Tinubu campaign spokesman said it was later discovered that “the fake news about Akufo-Addo’s letter was first published on June 22 by a rogue platform, whose url reads as worlsnews.space (sic) and site identity as World of News”, a discovery which he said is a proof that Biafra campaigners and Peter Obi supporters are the same.

Onanuga continued: ‘A content analysis of the site clearly showed that it is a Biafra news platform. The fake news was reposted on Facebook by Peter Obi Support Group, the same day – a clear proof that Biafra campaigners and Peter Obi supporters are the same.

“Both the Facebook account and the website are replete with fake stories about Bola Tinubu, including a fake story credited to former governor Akinwunmi Ambode, alleging that Tinubu demanded N50billion monthly payment from him. The spuriousness of the statement is in the evidence that Lagos did not begin to clock N50billion revenue until after Ambode left office. Tinubu could not have demanded N50billion monthly payment from Ambode when the state government didn’t make such in a month throughout the tenure of Mr. Ambode.

“The pirate website, which the Facebook account feeds on also parades malicious fake news and headlines such as “I am old, but my blood is young, please vote for me – Tinubu begs youth.

‘There is also the wicked of all headlines: When I become president, I will Build more prison (sic) for Igbo’s and IPOB members – Tinubu’.

But firing back, the presidential candidate of the Labour Party, Obi, who aligned with the position of his APC counterpart that campaigns for the coming 2023 general election should be issue-based rather than trying to run down opponents, however took exception to Tinubu’s claim that his supporters were members of Biafra.

Speaking through his media adviser, Valentine Obienyem, Obi stated that Tinubu’s advice ‘exactly mirrored what Obi had propagated over the years’.

He stated that if Tinubu’s supporters were mindful of their principal’s advice, “some articles published in some newspapers against Obi would not have been published, including those with offensive titles”.

On the alleged fake letter from the president of Ghana and the alleged request of N50billion monthly payment, Obi said while he was not bothered about their authenticity, it was wickedness to link them to his supporters, insisting that any publication from his group was always properly signed and the place it was coming from very clearly spelt out.

Obi also described as the height of mischief, the attempt to link his campaign to IPOB.

Obienyem said: “We know that things are not well in Nigeria. We know of the agitations in different parts of the country, our principal has always said what he would do with such organisations to stop their agitation and bring them back to Nigeria as one happy family.

He insisted that right from wehen Obi was governor, he was not known for the habit of attacking people or building lies against others.

He said Obi’s disposition was contrary to those of some of his opponents who he said actually originated most of the fake news, published them under false names and turned round to ascribe them to Obi or his supporters.