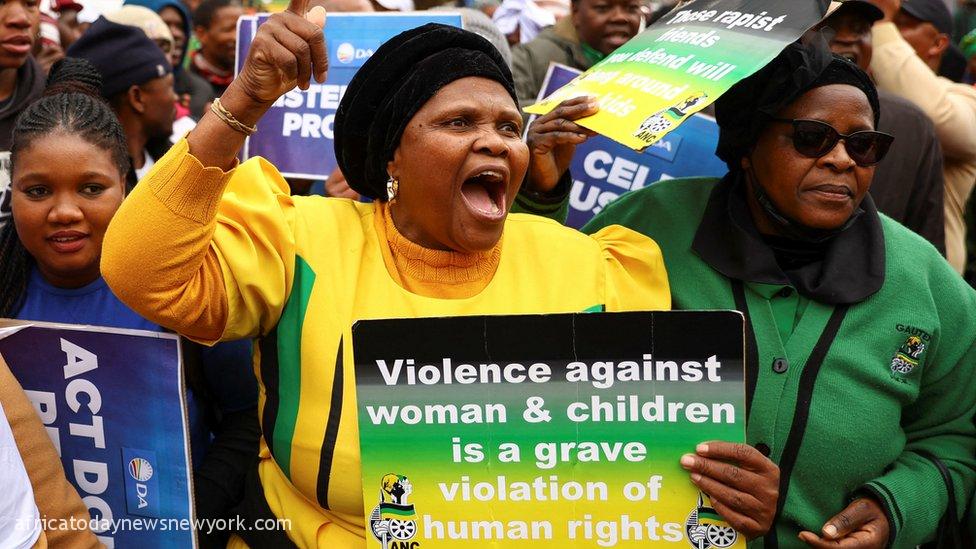 In the wake of widespread abuse at an abandoned mine outside of Johannesburg, South African prosecutors have arraigned seven men on 32 rape charges. Eight ladies were assaulted last month at a mine near the town of Krugersdorp as they were recording a music video.
They are allegedly illicit miners that scavenge for gold in abandoned holes. The men were among more than 60 suspects who testified in court about allegations including immigration and firearms.
They all are allegedly migrating to South Africa illegally. Given the seriousness of their offenses, they will likely now be tried independently. In a police cordon following the attacks, the women were able to identify the perpetrators.
Officers warn that as DNA tests are completed and more suspects are identified, the number of persons charged may increase. This is because several of the men involved were wearing masks when they attacked the crew, making it difficult to identify them.

According to one of the victims, the women were asking for ‘justice for all the girls that went through this…for the countless number of women who’ve been raped in this country’.
Protesters from civil society organizations and several political parties gathered outside the court to call for the men’s release on bail. Controversy over the assaults led to calls for authorities to take additional measures to prevent a sudden increase in aggression against women in South Africa.
Despite having one of the highest rates of rapes and sexual abuse in the world, the country’s incarceration rate is still modest. Due to the correlation between the assaults and migration, enraged crowds have been searching for foreign miners and setting their homes on fire as payback.
Three of the abused women talked about the incident which left them devastated and terrified for their lives. Earlier this month, during a speech to the nation, President Cyril Ramaphosa made an appeal for assistance in identifying and apprehending the perpetrators.
‘These horrible acts of brutality are an affront to the right of women and girls to live and work in freedom and safety,” Mr. Ramaphosa told South Africans.’
‘We call upon communities to work with the police to ensure that these criminals are apprehended and prosecuted.’
Maite Nkoana-Mashabane, South Africa’s minister for women, said the attacks had caused a “moment of crisis” and asked the nation to “defend the democratic gains” that women have made.
The recent gang rape has prompted activists to call for the declaration of a state of emergency so that rape and other gender-based crimes can be given priority for prompt litigation. Three years ago, Mr. Ramaphosa declared gender-based violence a national crisis.
In response to the most recent assault, the African National Congress, which is in power, called for the chemical castration of rapists.