Woman Raped, Defrauded In An Uncompleted Building In Lagos 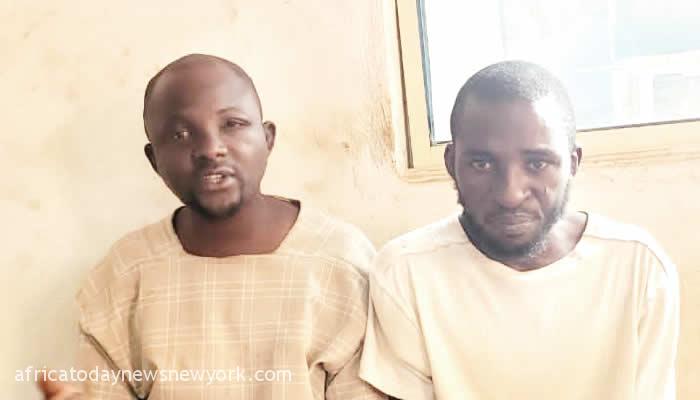 In addition, the woman was allegedly lured by the accused to an unfinished structure on Majiyagbe Street in Ipaja, where Adebayo allegedly sexually assaulted her.

According to information obtained by Africa Today News, Fisher contacted the victim as she was travelling to a location in Iyana Ipaja in order to find an address.

The suspect allegedly pretended to be a foreign businessman to the victim and informed him that he had come to Nigeria to deliver products to a client at the address and to get his unpaid bills.

According to a source, after Fisher unsuccessfully appealed for assistance, the little girl promised to help, but upon checking the address, she was unable to locate the site.

The insider stated, :But just as the girl was attempting to assist Fisher, Adebayo appeared out of nowhere as a neutral party and volunteered to help Fisher, even though they were already cooperating. Adebayo informed the girl that the address was false but then began persuading her to assist Fisher.

‘Fisher bemoaned being trapped and claimed to have certain documents that could be exchanged for tonnes of money, but he informed Adebayo and the girl that he needed money to purchase chemicals to turn the papers into cash.

‘Adebayo dumped N60,000 in a flash. The girl gave Fisher her gold jewellery and N10,000 after appearing to be persuaded. She also proceeded to a neighbouring ATM to withdraw N65,000 and presented it to Fisher, who then told Adebayo and the girl to take an oath in other not to reveal the secret.

After swearing the pledge, it was discovered that Fisher had given them a meeting place for the following day.

When they arrived, the local of Ogun State reportedly gave Adebayo and the girl the sack containing the money and informed them that the spirit in charge of turning the papers into money was requesting human blood as a sacrifice.

“Fisher claimed they needed to have sex to keep them both from passing away. He also threatened them by referring to the pledge they made. In order to avoid dying, the girl followed them to an unfinished structure on Majiyagbe Street in Ipaja at 9 o’clock, where Adebayo had sex with her, according to the source.

Africa Today News learned that the girl left the unfinished structure after Fisher, 42, and Adebayo, 32, committed the crime on September 3, 2022, and she then went to the Ipaja Police Station to report the case for inquiry.

On September 16, 2022, the police, under the direction of CSP Tokunbo Abaniwonda, the Ipaja Divisional Police Officer, reportedly sprang into action and detained Fisher and Adebayo at their hiding places in Ipaja.

The suspects admitted to the crime while being questioned, claiming they simply used the victim as a ruse.

“I only had one sleepover with her, and I took a contraception,” Adebayo admitted. I purchased the contraception in a nearby mallam’s store. Due to the fact that I don’t really know the female, I used the contraceptive. I had to defend myself.
Fisher described how he committed the act, claiming that he met Adebayo through his friend Bisi, who he claimed taught him how to create lies to deceive the people.

Read Also:  False Allegation About Rape Must Be Severely Punished

I’ve been asking a lot of folks for the address, he said. Some people said they had no knowledge of the location, while others urged me to return to my home nation. However, I insisted that I was unable to do so due to the gifts I had carried.

“When I explained I was asking for help counting Nigerian currency because I don’t know how to do it, the girl became persuaded. Adebayo and I had been speaking with folks in the meantime, but they did not respond to us.

“I explained to her when the girl was passing, and she paid attention. Adebayo then pretended to be a bystander, and as he passed, I called out to him and requested the girl to help me ask him for the address. Adebayo said that he had never heard of such an address.

SP Benjamin Hundeyin, the state police’s public relations officer, responded by saying that the accused had been charged and would appear in court.