2023: Prepare To Be Sworn-In As President, Adamu Tells Tinubu 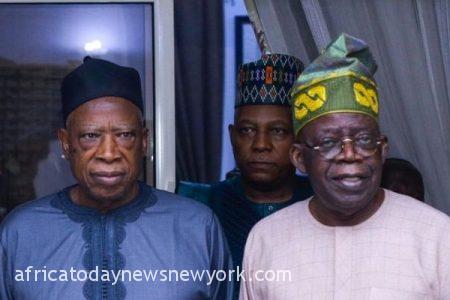 Ahead of next year’s Presidential elections, the national chairman of the ruling All Progressives Congress (APC), Abdullahi Adamu, has declared that he has been assured that the party’s presidential candidate Bola Tinubu will be elected to lead Nigeria.

His declaration was made public in a statement issued by Bayo Onanuga, Media Director, APC Presidential Campaign Council (PCC).

According to the statement, Adamu made the comment on Thursday at a town hall meeting in Lafia, the Nasarawa capital

The chairman was in attendance at a meeting between Tinubu and stakeholders in the mining sector.

‘Except God, President Buhari is the highest authority in Nigeria today. Buhari has said it and it shall come to pass.

‘Adamu urged voters not only in Nasarawa, but also in the adjoining states to vote massively for the party and its candidate’, Onanuga added.

The former Nasarawa governor urged Tinubu to get ready to shoulder the responsibilities of the President.

In another report, Tinubu had recently come out to openly berate the camps of his counterparts from the Peoples Democratic Party, PDP, Atiku Abubakar and Labour Party, LP, Peter Obi for poking holes at his absence at the Arise TV town hall meeting in Abuja.

Recall that a spokesman of the Atiku/Okowa presidential campaign team said Tinubu was afraid of being exposed; hence his refusal to attend national debates.

However, the APC presidential candidate said he would not be “railroaded” into appearing for media debates.

Tinubu disclosed this through his Director of Media and Publicity, Bayo Onanuga.