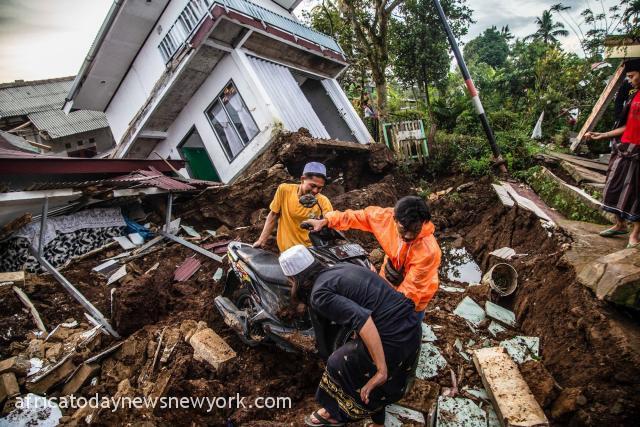 The death toll that has been recorded following an earthquake on Indonesia’s main island of Java on Wednesday soared to 268 even as rescuers continued their search for survivors in the rubble and relatives started to bury their loved ones.

Africa TodayNews, New York gathered that body bags have continued to emerge from crumpled buildings in Indonesia’s most populous province, West Java, as rescue efforts turned to any survivors still under debris in areas made hard to reach by the mass of obstacles thrown onto the roads by the quake.

The epicentre of the shallow 5.6-magnitude quake yesterday was near the town of Cianjur where most of the victims were killed, hundreds were injured and dozens feared trapped as buildings collapsed and landslides were triggered.

Meanwhile, at least 151 people remain missing and more than 1,000 have been injured, said the official, who like many Indonesians goes by one name.

‘The focus is still on the search and evacuation of victims. That’s the priority,’ he said. ‘When the emergency response ends, hopefully everyone has been found.’

President Joko Widodo visited the area on Tuesday, offering compensation for victims and ordering disaster and rescue agencies to ‘mobilise their personnel’.

Many of those killed were children, according to the head of Indonesia’s national rescue agency Basarnas.

‘They were at school, at 1 pm, they were still studying,’ Henri Alfiandi told a press conference.

Some of those dead were students at an Islamic boarding school, while others were killed in their homes when roofs and walls caved in on them.

The search operation on Tuesday was made more challenging because of severed road links and temporary power outages in parts of the largely rural, mountainous region.

Those who survived camped outside in near-total darkness surrounded by fallen debris, shattered glass and chunks of concrete.

Doctors treated patients outdoors at makeshift wards after the quake, which was felt as far away as the capital Jakarta