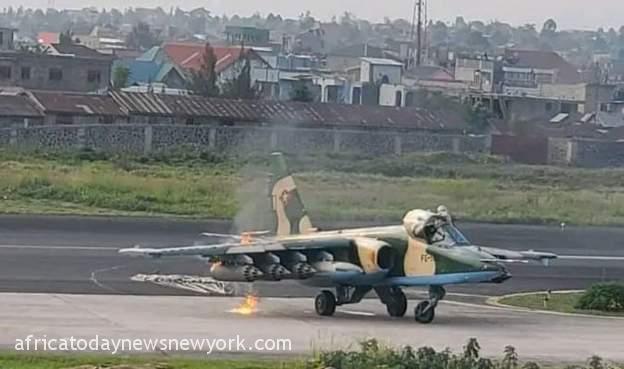 The government of Rwanda has asserted ‘defensive measures were taken’ on a Democratic Republic of Congo fighter jet that ‘violated’ its airspace on Tuesday evening.

Images shared on social media which obtained by Africa Today News, New York shows a military plane being shot at while flying at a low altitude between the towns of Goma in DR Congo and Gisenyi in Rwanda.

Other images show the damaged plane – a Soviet Union-made Sukhoi-25 – being cooled down with water at Goma airport.

DR Congo’s information ministry, in a statement, condemned the incident and denied that its jet had flown over Rwandan airspace.

It said the government ‘does not intend to let this [incident] go’ and had the ‘legitimate right’ to defend itself.

‘The government considers this umpteenth attack by Rwanda as a deliberate action of aggression that is equivalent to an act of war,’ the ministry noted.

Rwanda said this was the third incident involving a Congolese fighter jet on its airspace and asked its neighbour ‘to stop this aggression’.

The latest incident adds to the tensions between the two neighbours.

In another report, no fewer than 10 people were killed and over 39 others wounded after a bomb blast ripped through a church in the eastern Democratic Republic of Congo on Sunday, an attack blamed on suspected Islamists.

The attack’s specifics are unclear, but Congolese military spokesman Antony Mualushayi claimed that a Pentecostal church in Kasindi, a town in North Kivu province that borders Uganda, was the scene of a ‘terrorist incident.’

He stated that a Kenyan was detained after the bombing, but it is still unknown who carried out the attack in the unrest-plagued area.

39 people were injured and at least 10 people died in the explosion, according to Mualushayi, who revised the earlier death toll of five. Both tolls, he maintained, were temporary.