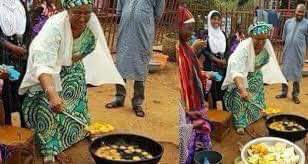 As Election draws near, politicians are coming up with different gimmicks just to get the votes of the masses.

They have taken over social media spaces with their make believe deceptions.

They are now snapping pictures where they are buying foodstuffs in the marketplaces.

Pictures of where they are supervising road constructions and installations of streetlights.

Pictures of where they are empowering women and youths with sewing machines, motorcycles, and  hairdressing equipments.

They have all turned to emergency philanthropists just because of elections.

They will show where they are giving non existent scholarship to indigent students.

Where they are building churches, and or donating towards church buildings.

They have all recruited and equipped with electronic gadgets, youths who hurl insults at their opponents, and who ceaselessly throw jabs for them on social media, and peddle their lies.

All those things are publicity stunts and gimmicks geared towards getting our votes.

They will make those same old promises they are known for.

They will promise to build roads, markets, pipe borne water, electricity and other political lies.

They will share rice and ankara that will wash off after two  weeks to the people.

The funniest part of it is that after years of deceit and non performance from the politicians, just at the sight of 500 naira, bag of rice and T shirt, the oppressed and hungry masses will start shouting “OJEBEGO” which means he has already won.

You wouldn’t blame them because there is serious hunger in the land.

Once they win elections,they will stop going to the markets to take pictures.

The scholarships will cease for the next 3 years. Their empowerment programs will be things of the past.

They automatically become inaccessible to those that voted them.
To even get a letter of recommendation from them will be a tug of war.

The youths  that were used for hatchet Internet jobs will be dumped.

The heart wrenching thing is that the people will be scammed over and over again and they will still willingly die for the politicians.

The youths will snatch ballot boxes for them and lose their lives in the process, while their children will be safely tucked away in Europe and America enjoying life.

The politicians will be bragging  they are doing the electorates favour with their constituency funds.

Their children will be working in blue-chip companies, while our youths will end up as political thugs, and end up in N Power and the likes.

Their relatives and family members will get all the juicy federal jobs, while the masses get nothing.

Their families will enjoy constant power supply, while our families live in perpetual darkness.

Their dogs feed more than the average man on the street, yet we still vote them.

They are guarded by armed securities, while we sleep with our eyes open because of armed robbers, terrorists and kidnappers.

This vicious cycle has continued unabated. The politicians have mastered their deception that they see us the masses as pawns in their chessboard.

Yes we can be bought with little crumbs. The money spent on us must be recouped, that’s why they don’t embark on developmental projects, as we have eaten our own development with our mouths.

It’s time to reject those lies and make our politicians accountable and responsible.

It’s time to start holding them by their words and promises.

It’s time to teach them that representing the people is not the same as enriching themselves.