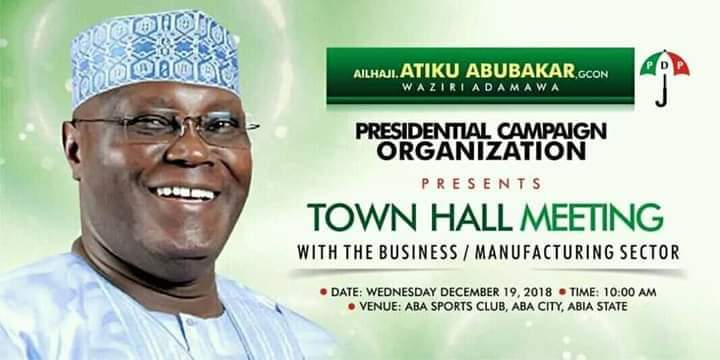 The interactive session  according to a statement issued by the State Coordinator, Atiku/Obi Presidential Campaign Organisation, Chief Charles Ogbonnaya will take place at Aba Sports Club by 12 : 00 noon.

Chief Ogbonnaya in the release stated that the essence of the Town Hall Meeting would be for the candidate to understand basically the challenges facing the business community in Aba.

The release has it that Alh. Atiku Abubakar will be accompanied on the trip by his Running Mate, Mr. Peter Obi, National Chairman, PDP, Prince Uche Secondus, Senate President and Campaign DG, Dr. Bukola Saraki and other National Directors of the Campaign Council.

The Town Hall, which is planned to be interactive, will meet with businessmen in Aba discussing their challenges with the PDP presidential candidate and listening to his modus operandi  to better their business environment if he would become president of Nigeria.

Ogbonnaya further disclosed that the Governor of the state, Dr. Okezie Ikpeazu will be the Chief Host while many of the Atikulated Groups are expected to mobilise their members to the venue of the event.

“It is common knowledge that since Governor Okezie Ikpeazu mounted the saddle as Governor of Abia State, Aba has taken its rightful place as the SME Capital of West Africa attracting unprecedented attention from Governments and Development Partners,” a section of the statement read.