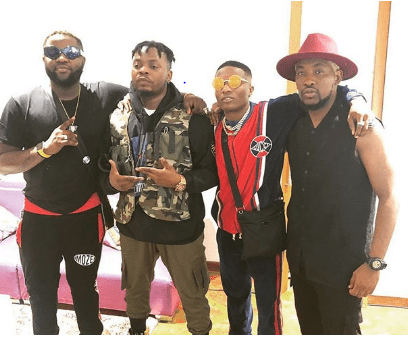 Photo: L-R Skales, Olamide,
Wizkid and Dotun at Olamide’s concert in Lagos on Sunday, December 23, 2018.
Afro pop star, Ayodeji Balogun aka Wizkid thrilled fans as he performed at  Olamide’s Adedeji aka Baddo’s ‘Live In Concert’ (OLIC)  concert in Lagos.
Wizkid’s performance was  shortly after his own show ‘Made in Lagos’ concert.
Both shows sold out  and Olamide’s ‘Live In Concert’ (OLIC) tickets were even sold out with fans trooping to support each artist.
At about 2 a.m, Wizkid kicked off a live set at his own festival which spanned over one hour.
After the electrifying show, he made it to Olamide’s concert where in a brief performance,  he entertained the audience with beautiful performance of ‘Kana’.