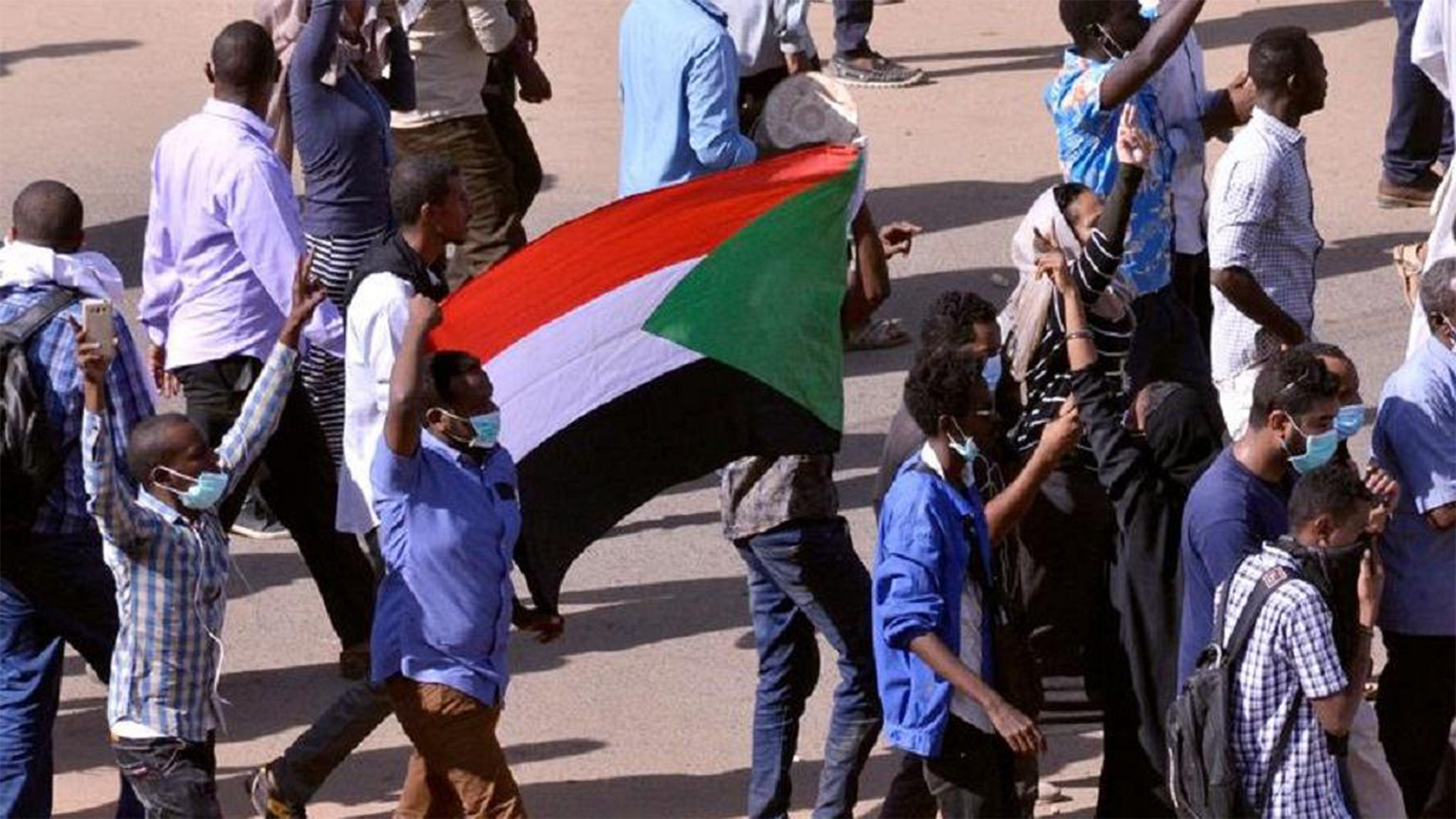 A committee of professional organisations involved in the protests said in a statement that authorities had raided a meeting of opposition leaders in Khartoum. They detained a total of nine people, including Siddiq Youssef, a senior leader of Sudan’s Communist Party, as well as leaders from the pan-Arab Ba’ath and Nasserist parties, the statement said.

The raid came after a coalition of opposition groups called for more protests after the weekly noon prayers on Friday.

The head of the media office at the National Intelligence and Security Service denied any knowledge of the arrests.

Fourteen leaders of one of Sudan’s two main opposition groupings were detained last Saturday and then released some nine hours later.

Sudan doubles down on social media amid protests

A digital rights group is reporting that Sudanese authorities have clamped down on access to social media in the wake of spreading anti-government protests.

Access Now and the #KeepItOn coalition – a group that fights internet shutdowns – have thus called on network operators in the country to push back from state pressure and keep people online.

The coalition said on Thursday that it was demanding that: “operators like MTN Sudan and Zain Sudan to more transparently notify the public of restrictions and push back against government requests that could violate human rights.”

Government has officially denied any such move even though social media has been a hot spot for the organization of protesters in what started out as a protest against hikes in bread and fuel prices.

The death toll so far is another area of contention with the latest government figures pegged at below twenty whiles Amnesty said days ago that it was up to thirty-seven.

A network of Sudanese journalists went on strike Thursday in the wake of deadly protests sparked by a hike in bread prices, while opposition groups called for further rallies.

“We declare a three day strike from December 27 to protest against the violence unleashed by the government against demonstrators,” said the Sudanese Journalists’ Network which advocates free speech.

Journalists in Sudan frequently complain of harassment from the authorities, and the African country has a dire rating on international press freedom rankings.

Entire print runs of newspapers are often confiscated over articles deemed offensive by the powerful National Intelligence and Security Service (NISS), which is spearheading the current crackdown on protesters.

Activists and opposition groups have called on people to take to the streets again over the next few days.

“We urge the Sudanese people to continue their demonstrations until success is achieved by overthrowing the regime,” the Sudanese Communist Party said in a statement.

A member of President Omar al-Bashir’s government on Wednesday called for a probe into the killings of protesters in demonstrations that have rocked the economically troubled country.

Sudanese authorities say eight protesters have been killed in clashes, but Amnesty International has put the death toll at 37.

At a press conference in Khartoum, Popular Congress Party senior official Idris Suleman said his party’s own reports indicated that 17 people “were martyred” and 88 wounded in the demonstrations.

“We call on the government to launch an investigation into the killings,” Suleman said.

“Those who committed these killings must be held accountable.”

Popular Congress Party is part of Bashir’s government and has two ministers of state in the cabinet and seven lawmakers in parliament.

Qatar keen on stability in Sudan

Since Wednesday, cities across Sudan have been shaken by protests triggered by an economic deterioration. Protesters have also called for an end to Bashir’s 29-year rule.

“During the call Sheikh Tamim declared that his country stood with Sudan and was ready to offer all that was necessary to help Sudan overcome this ordeal, stressing his keenness for the stability and security of Sudan,” the statement said.

Qatar and its regional rivals have increasingly vied for influence in Sudan and other countries on the Red Sea and Gulf of Aden.

Gulf states have also been an important source of funding for Sudan after it lost three-quarters of its oil output when the south seceded in 2011.

Sudan’s opposition leader, Sadiq al-Mahdi, has called for Mahdi called for a “national and international investigation” into the deaths of protesters during price demonstrations that rocked the country this week.

A government decision to increase the price of a loaf of bread from one Sudanese pound to three (from about two to six US cents) has sparked demonstrations across the country since Wednesday.

The protest movement “is legal and was launched because of the deteriorating situation in Sudan,” he said in his first news conference since returning home on Wednesday after almost a year in exile.

While the official government position says at least eight people died during Thursday’s protests, while only person lost their life on Friday, the opposition said “22 people were martyred and several others wounded”.

Madhi blamed ‘armed repression’ for the death of the protesters, while authorities insist they used restraint in containing demonstrations.

In a rare press conference, the head of Sudan’s National Intelligence and Security Service (NISS), Salah Abdallah Mohamed Saleh, said seven people had been arrested in connection with the burning of ruling party office buildings in earlier protests.

“We recognise that we must have self-restraint and manage things wisely and take care of the lives of the people and of public property, and we are not bothered by demonstrations, but we are upset by the lapse in security,” said Saleh, also known as Salah Gosh.

Web users reported problems accessing the internet, and some accused the government of blocking social media including Facebook, Twitter and WhatsApp in a bid to stop protesters communicating. There was no comment on that from the government.

Authorities have declared states of emergency and curfews in cities in at least four of Sudan’s 18 states, according to local media.

The ministry has also announced that it would shutter universities in Khartoum state and schools and kindergartens in the capital city.

Sudan’s government has blamed nationwide protests that have left at least eight people dead, on ‘infiltrators’ and opposition parties, rather than the soaring prices.

The demonstrations on Wednesday and Thursday were among the biggest since crowds came out against cuts to state subsidies in 2013.

Officials told Sudania 24 TV that six people died in protests in the eastern city of al-Qadarif and two more in northern Nile River state, without giving details on how they were killed.

He did not name anyone but he also said the protesters, some of whom have called for the overthrow of President Omar al-Bashir, were being exploited by opposition parties.

“Some political parties emerged in an attempt to exploit these conditions to shake security and stability in order to achieve their political agenda,” Jumaa said. He did not identify the parties.

He added that the demonstrations had been “dealt with by police and security forces in a civilised way without repression or opposition”.

Police fired teargas to break up a crowd of around 500 people in the capital Khartoum, then chased them through back streets and made arrests, a witness said.

Public anger in Sudan has been building over price rises and other economic hardships, including a doubling in the cost of bread this year and limits on bank withdrawals. At 69 percent, Sudan’s inflation rate is among the world’s highest.

Leading Sudanese opposition figure Sadiq al-Mahdi returned to Sudan on Wednesday from nearly a year in self-imposed exile and called for a democratic transition in Sudan.

“The regime has failed and there is economic deterioration and erosion of the national currency’s value,” Mahdi, who was Sudan’s last democratically elected prime minister and now heads the Umma party, told thousands of supporters.

Sudan’s president Omar al- Bashir, one of Africa’s longest-serving leaders, took power in an Islamist and military-backed coup in 1989. Lawmakers this month proposed a constitutional amendment to extend term limits that would have required him to step down in 2020.

Protests spread to other cities

Anti-government protests spread to the Sudanese capital, Khartoum on Thursday, as more people demonstrate against high prices and a liquidity crunch.

Around 150 protesters shut down a main street in Khartoum and chanted: “The people want the fall of the regime.”

Police in riot gear broke up the protests.

A member of parliament said a university student was killed when protests spread from Atbara city to al-Qadarif.

‘‘The situation in al-Qadarif has become dangerous and the protests have developed to include fires and theft and it’s now out of control,’‘ Mubarak al-Nur said.

Security forces in Sudan fired teargas to quell protests on Thursday, after people took to the streets chanting anti-government slogans.

A state of emergency was declared in the Atbara city on Wednesday after hundreds of people protested against price increases and set fire to the local headquarters of the ruling party.

A curfew was declared from 6 p.m. to 6 a.m. in Atbara — Sudan’s railway hub, with a large railworker population manning various lines, interchanges and maintenance workshops — the state security committee said.

Atbara is historically a hotbed for anti-government protests.

Sudan’s annual inflation edged up to 68.93 percent in November from 68.44 percent in October.

Prime Minister Motazz Moussa said inflation for the full year 2018 was expected to be 63 percent.

Severe shortages of fuel and bread, both subsidised by the government, have forced people in the capital and other cities to queue at bakeries and petrol stations.

Earlier on Wednesday, Moussa said Sudan’s 2019 budget included 66 billion Sudanese pounds ($1.39 billion) in subsidies, 53 billion of which is for fuel and bread.