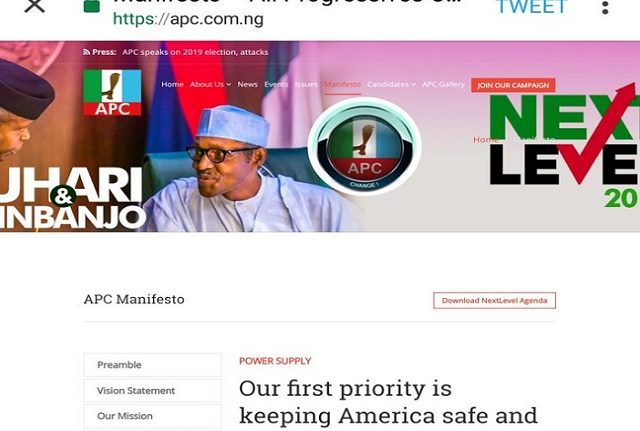 Photo: The plagiarised manifesto on APC website before the part pulled it off amidst the backlash

The All Progressives Congress Party has made a helluva blunder in their bid of trying to create a political manifesto for the forthcoming presidential elections. The party has plagiarised the President of United States, Donald Trump’s manifesto, and ignorantly published it on their website.

APC has promised, “Keeping America” safe while obviously neglecting the insurgency by Boko Haram that has bedeviled the North-East of Nigeria which has been witnessing incessant killings of the citizenry including soldiers.

The party came under backlash by many Nigerians. Notable among them is the former media aide to the erstwhile President Goodluck Jonathan, Reno Omokri.

Why will you vote a party that plagiarised an American manifesto? Look at the photo, then quickly go to the link (they will soon change it). They claim their first priority is to protect AMERICA! Obviously lifted from @RealDonaldTrump https://t.co/l9qO6JcC40pic.twitter.com/jCcFSL5lQI