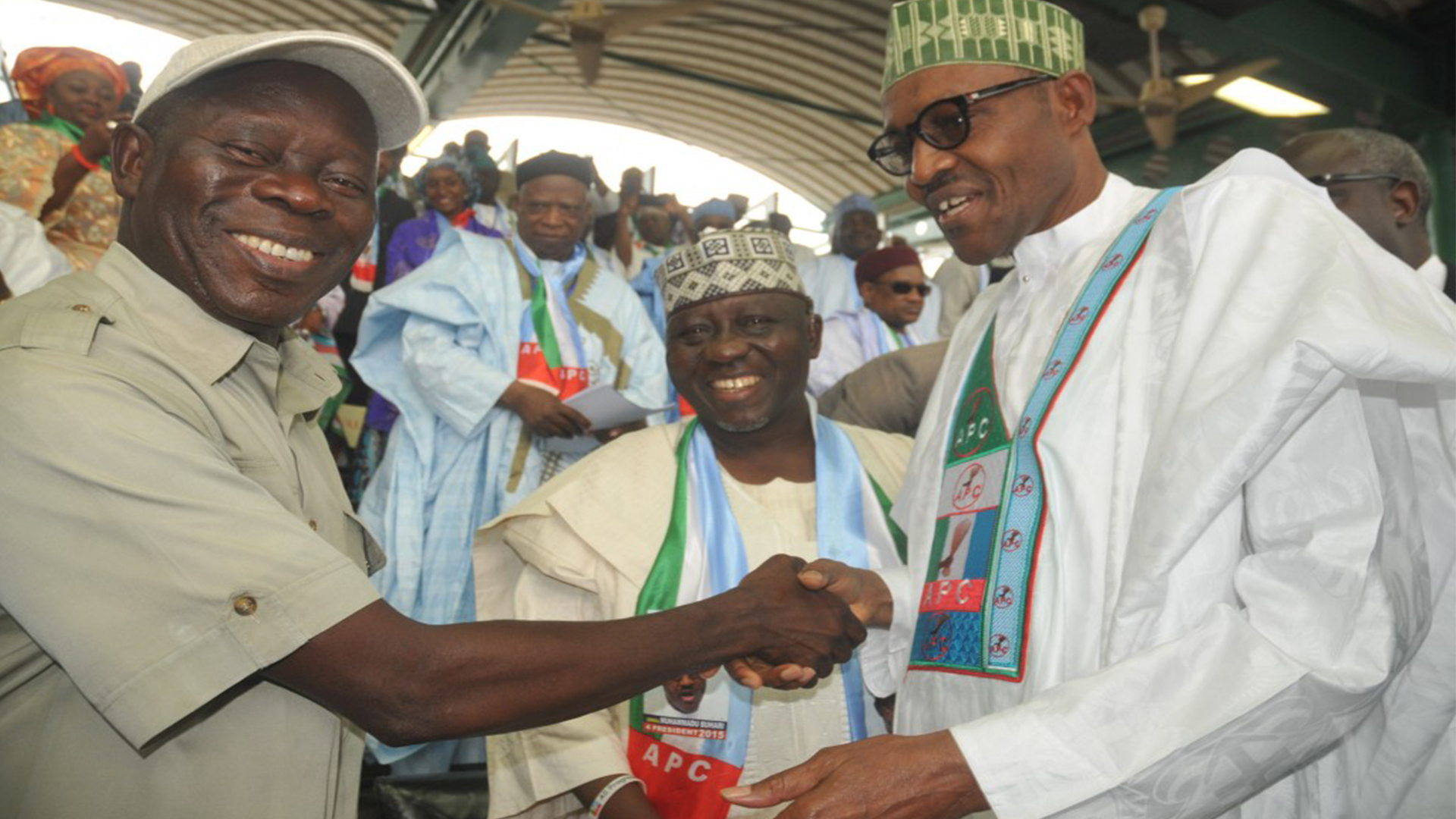 Oshiomole and Jubril, the impostor

The rally was brought to an abrupt end after Buhari raised the left hand of the APC governorship candidate in the state, Prince Dapo Abiodun.
The president could not end his speech because immediately he raised Abiodun’s arm, some aggrieved persons threw objects towards his direction, forcing security operatives to form a ring around him.

In a swift reaction to the violence, the Peoples Democratic Party (PDP) described the event as a direct response of Nigerians to his four-year misrule as depicted in the expansion of poverty and bloodletting in our nation.
The aggrieved persons had earlier pelted the National Chairman of APC, Adams Oshiomhole, with stones and chased supporters of Abiodun from the stadium.

Before the arrival of the president and his campaign team, suspected thugs destroyed the publicity materials bearing Abiodun’s name and pictures.
They also attacked supporters of the governorship candidate who wore yellow T-shirts branded in his name.

The outbreak of violence at the rally started shortly after Oshiomhole, presented the party’s flag to Abiodun.
The presentation of the flag apparently angered the party’s supporters as they hurled empty plastic of table water and other objects at the direction of President Buhari and other chieftains of the APC on the high table.

Shouts of “Ole! Ole! Ole!” rented the air as the angry mob pelted Oshiomhole with stones.
Before Oshiomhole spoke, the former governor of Osun State, Rauf Aregbesola, angered the crowd who reacted violently when he told them to vote for APC in all the elections.

The state governor, Ibikunle Amosun, who was the first speaker, had told the crowd to vote for President Buhari at the presidential elections, adding that they know what to do at the other elections.
When Oshiomhole was pelted with objects, security operatives shielded President Buhari.
Oshiomhole was forced to end his speech abruptly and handed over the microphone to a presidential aide, Abike Dabiri, who introduced Vice President Yemi Osinbajo as the next speaker.
However, before the vice president delivered his speech, the state governor, Amosun took to the podium for the second time to appeal to the aggrieved persons in the crowd.

“On Saturday, February 16, you are to vote for presidential candidate of the APC. But I want to urge you to choose whoever you like across the parties as governor of Ogun State.
“There is no problem about it. I have no problem about it.
The rest people of Ogun State will decide,” Buhari said.
However, when he raised the hand of Abiodun to introduce him as APC gubernatorial candidate, the crowd started throwing objects at the president and this forced security operatives to shield him.

Meanwhile, the PDP has described the public pelting and jeering at President Buhari and his APC, during his election campaign rally in Abeokuta, Ogun State, as a direct response by Nigerians to his four years misrule as depicted in the expansion of poverty and bloodletting in our nation.

The Director of Media and Publicity, Mr. Kola Ologbondiyan, in a statement yesterday, said the people of Ogun State, and indeed, the South-west, have shown that they are in direct alignment with other states and geo-political zones of the country in rejecting Buhari and Vice President Osinbajo, whose administration has foisted so much injustice and brought unprecedented pain and anguish to Nigerians.

According to him, “It is instructive to note that Mr. President was pelted in Abeokuta barely 24 hours after his Zamfara State rally on Sunday, where he attempted to incite Nigerians to join the APC in their planned resort to violence to derail the 2019 general election, having realised that they stand no chance of winning the election.”

Ologbondiyan added that after the unpalatable encounters in all his rallies, Mr. President needs no further signal to show him that the people have completely rejected him, despite his false performance indices.
He stressed that Nigerians are determined to deal him a crushing defeat on February 16 by voting en masse for the people’s candidate, Atiku Abubakar, as the next President of the country.
“Mr. President can now see that Nigerians cannot be bought with N10,000, as he was made to believe by Prof. Osinbajo and members of the cabal in his presidency,” Ologbondiyan said.