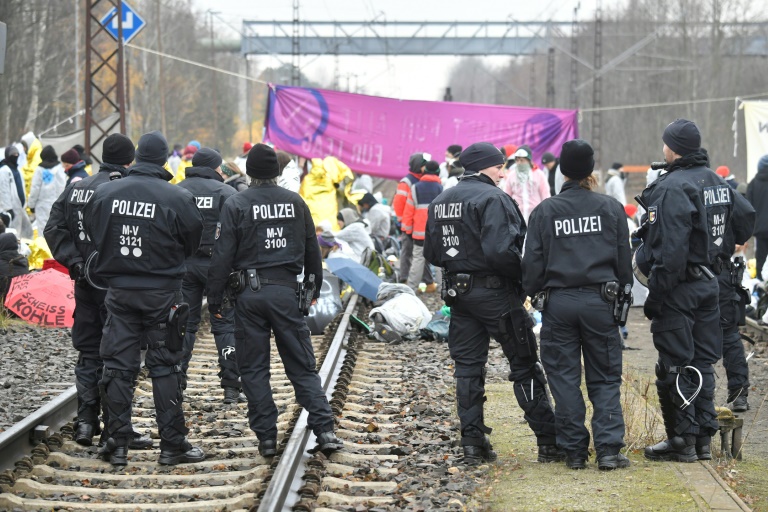 Thousands of activists on Saturday occupied several opencast coal mines in eastern Germany, seeking to put pressure on the government to phase out the fossil fuel — a divisive issue in the country’s rust belt.

Wearing masks and dressed in white, hundreds of campaigners stormed into the Jaenschwalde Ost mine while another 450 sat down on a railroad connected to the site.

Similar action hit the Welzow-Sued mine, also in the Lausitz basin.

Meanwhile, MIBRAG which operates another mine — the Vereinigtes Schleenhain site — south of Leipzig said about 1,200 protesters blocked a coal-excavator, forcing the group to halt operations.

“We have nothing against peaceful protests and the exercise of democratic rights, but we reject all forms of breach of laws and violence,” MIBRAG chairman Armin Eichholz said in a statement.

Both MIBRAG and Czech-controlled LEAG which operates the two Lausitz mines said they were filing legal action against the protesters.

Police were able to clear the mines only after several hours.

In these mining regions, thousands of jobs depend on coal. But some residents are also threatened with the loss of their homes over a planned expansion of mining.

Underlining the division over the coal industry, dozens of pro-coal militants also gathered in the Lausitz basin.

“Ende Gelaende wants to destroy our infrastructures, it’s not the right way to do it… we need coal in the region,” Thomas Hauke, 62, told AFP, referring to the anti-coal group organising the protest.

All three mines hit Saturday produce lignite, a low-grade type of brown coal that is considered the most harmful to human health and the environment.

Calling Saturday’s coordinated action a success, a spokeswoman Ende Gelaende (Game Over) said around 4,000 turned up for the blockades and related protests.

“Despite all the nice speeches and promises, 2019 was another lost year for the climate,” said Nike Malhaus.

The occupation is being supported by other environmental groups, including the German branch of Fridays for Future which is also holding a protest at a power station in the region.

It marks the second time this year that Ende Gelaende has occupied a coal mine. In June, several hundred climate activists carrying sleeping bags blocked the vast Garzweiler lignite mine near Cologne for several days.

Campaigners say the government’s plans to phase out coal by 2038 announced this year do not go far enough.

They want that date brought forward for Germany to meet its international commitments to slash carbon pollution.

“Germany pretends to be a pioneer in climate protection abroad, yet its climate policy making is disastrous. We will not be standing by while politicians and corporations destroy our future,” said Malhaus.

The mining industry in the Lausitz basin, which stretches all the way into Poland, is vital to the local economy.

LEAG is one of the region’s largest employers with 8,000 workers.

Opposition to the government’s plants to shut down coal mines was seen as a factor behind a surge for the far-right AfD party in regional elections in September.

The AfD is now second after the centre-left Social Democrats in the Brandenburg region where the Lausitz mines are located.

The local council in Cottbus, a city a few kilometres from the Lausitz basin, passed a motion condemning the occupation with the support of all parties except the Greens.

Malhaus admitted there was “a climate of defiance towards our movement on the local level”.

But she also pointed to local support in the Lausitz.

“We have a lot of campaigners here so it’s not true to say that all inhabitants of this region are in favour of coal,” she said.

LEAG has also faced strong opposition to its plans to expand lignite mining in the region, which would result in the resettlement of two villages.

Germany’s decision in 2011 to abandon nuclear power following the Fukushima disaster in Japan has made the country more dependent on coal as renewables struggle to fill the gap.