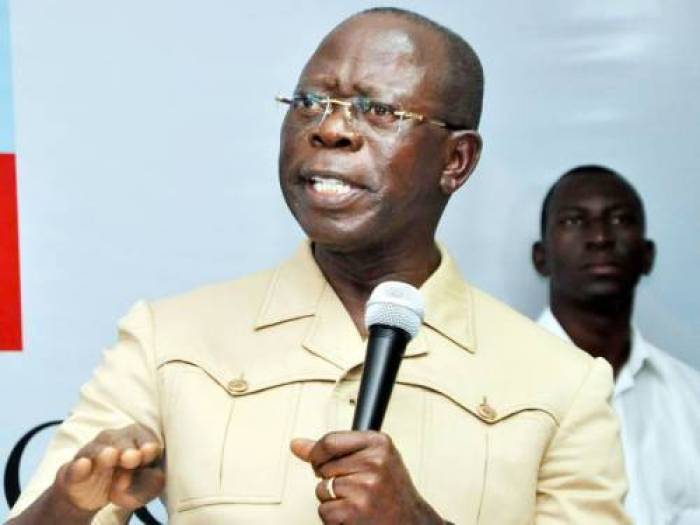 There are strong indications that some All Progressives Congress governors are plotting to seize the control of the party as part of efforts to install President Muhammadu Buhari’s successor in 2023 .

The PUNCH gathered on Monday that despite Buhari’ s meeting with the APC governors on Thursday and his discussions with the party ’s state chairmen on Friday , some governors were pressing ahead with the plot to remove the National Chairman of the party, Adams Oshiomhole .

It was learnt Oshiomhole ’ s fate was linked with the desperation of the governors to install Buhari’s successor and determine those who would succeed them .

The Chairman of the Forum of the APC State Chairmen , who is the party ’s Chairman in Zamfara State, Ali Bukar , had at the meeting with the President on Friday appealed to Buhari to caution the governors.

He had said, ” Let me also express our recent worries regarding the activities of some of the governors who are undermining the efforts of the national chairman of our great party, Adams Oshiomhole , to reposition the party by plotting his removal .

“ It is more worrisome knowing full well that they are not doing this because the national chairman is not performing his duties , according to the constitution , but they are fighting him due to their 2023 presidential ambitions when it is a notorious fact that Mr President had just commenced his second term in office a few months ago .”

A top member of the APC National Working Committee , who confided in The PUNCH on Monday , said that most of the party ’s ambitious governors were behind moves to remove Oshiomhole .

The source, who spoke on condition of anonymity for fear of retribution , said, “ Everything that is happening is all about 2023 .
We know that these things are being propelled by the desire of governors to secure their political future post – Buhari, don’ t forget we are the ruling party and we are doing everything lawful to ensure it remains so beyond 2023 .

“ Outgoing governors want to pick those who will succeed them . They also want President Muhammadu Buhari’s successor to come from within their ranks and they hold the opinion that for this to happen , they need to control the party at all levels.

“ Whether you like it or not , any group , which controls the party at whatever level , has leverage over others . They know Oshiomhole is strong- willed so they want someone who they have a hold on to fit into their plans. That is all that is happening nothing more .”

Efforts to get a response from the Progressives Governors ’ Forum were futile . When contacted, the Press Secretary to the Kebbi State Governor , Abubakar Mua ’zu , said, “ His excellency ( Atiku Bagudu, Chairman , PGF ) is out of the state on an official assignment . I believe the PGF has a person who speaks for them , contact him .”

Calls to the mobile telephone of the Director -General of the PGF , Salihu Lukeman , were neither picked nor returned. A response to a text message sent to him on the subject was still being awaited as of 8 : 03 pm .

But a source in the APC governors’ forum told The PUNCH that Oshiomhole arranged the state chairmen ’s meeting with Buhari, as part of efforts to prevent his removal .

The director – general of the forum , had last month asked the national chairman of the party to convene a national executive committee meeting of the party or resign.

He had said that under Oshiomhole ’s leadership , the APC was battling with crises in Bayelsa, Anambra , Edo , and Ondo states.

Efforts to get the Chief Press Secretary to Oshiomhole , Simon Ebegbulem , did not succeed as he did not answer calls to his phone on Monday . He had also yet to respond to a text message sent to him as of 8 : 40 pm .

Also the APC National Publicity Secretary , Lanre Issa – Onilu, in a text message said he was in a meeting when called .

We can ’ t shut govs out – National Vice -Chairman ( North )

But the National Vice Chairman ( North ) , Inuwa Abdulkadir, said, in an interview with one of our correspondents , that the APC could not shut governors out of the party .

He said, “ They are important stakeholders in any party . The stage we are democratically has shown how strategic governors are. Even as members of the National Assembly , you are elected from a state and the governor is the leader of the party at the state level . Party politics is about service and interests . This is normal in a democracy .”

On his part , the Cross River State Chairman of the APC , Mr John Ochala , in an interview with one of our correspondents , gave more insights into Buhari’s meeting with the party state chairmen .

He said, “ What took us there was to congratulate him on the party’ s victory at the Supreme Court . We also appreciated him for his efforts to put the economy together and also the degrading of insurgents as well as the fight against corruption. ”

Ochala added that the chairmen told the President that the party faithful were not happy that those who worked for the success of the party in the last general elections had not been compensated .

He stated , “ We urged him to try to compensate the party faithful . Finally , we frowned on some governors who are distracting the national chairman of the party because of their selfish ambition .

“ We said that the call for the removal of Oshiomhole was uncalled for . We told him ( the President ) that he should not listen to them and that it was a distraction ahead of 2023 . He ( President Buhari) should caution them . ”

Meanwhile, the APC in the South -South has said it is still consulting members listed on the peace committee on the crises in Cross River , Edo and Rivers chapters of the party .

The APC National Vice -Chairman ( South – South ) , Chief Hiliard Eta , disclosed this in an interview with one of our correspondents on Monday .
The party had at its November 28 emergency zonal meeting in Abuja agreed to raise the committee .

The meeting was called to appraise the performance of the party in the last general elections and the recent victory in Bayelsa State, among other issues .

Speaking with our correspondent, Eta said the list was ready but had not been made public . “ The list is ready but we have to make proper consultation with the members before we can release the list to the public ,” he said .

Eta stated that the party wouldn’ t want its efforts to go in vain so had ensured that members were men of proven integrity and active members of the party.