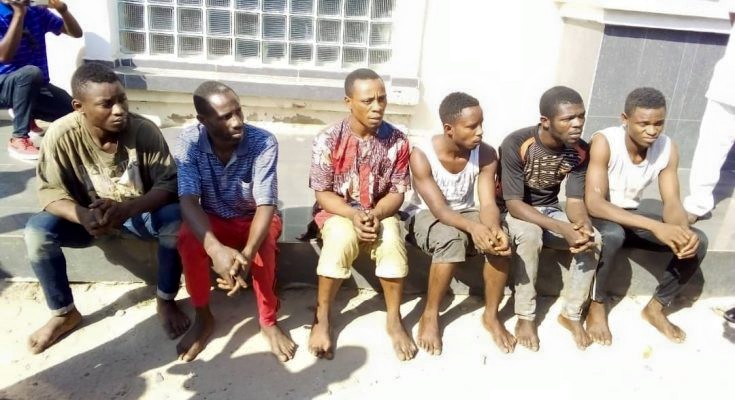 Alleged Killers of PDP women leader, in Ochadamu paraded by the police in Lokoja.

The Kogi State Police Command has paraded Ocholi Edicha and five others for allegedly burning to death the PDP woman leader a day after the State Governorship Election.

Addressing Newsmen in his office, the Commissioner of Police, Hakeem Busari said the suspects would be arraigned in court very soon.

Ocholi Edicha, during interrogation confessed that he led the gang that burnt, Mrs Salome Abuh – the Police commissioner said.

He said the suspects further confessed that they were responsible for the series of armed robbery incidences in Ochadamu and its environment.

The Commissioner of Police condemned the killing of Mrs Salome, called for calm and assured that the perpetrators would not go unpunished, adding that efforts were being made to arrest other fleeing members of the gang.

Speaking on behalf of the gang, Ocholi Edicha confessed to slapping Mrs Salome Abuh on the day of the election, but denied the burning down of the house.