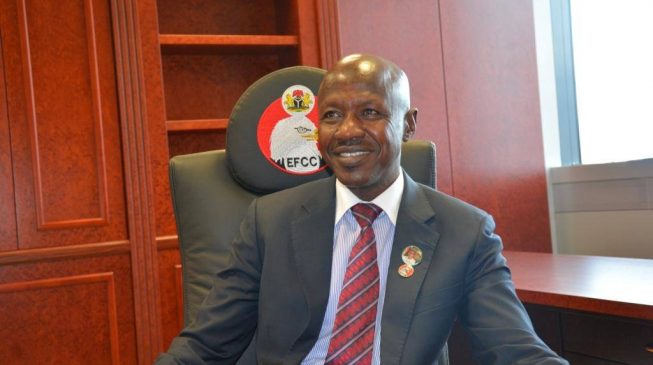 Also, a governor in the North has withdrawn his support for Magu’s re-appointment following alleged refusal of the EFCC boss to halt ongoing investigation into some accounts of the state.
It was also learnt that some lobbyists are pushing for what is now known as “Ribadu Treatment” for Magu.

A former Chairman of EFCC, Mallam Nuhu Ribadu, was sent on a compulsory study
leave at the National Institute for Policy and Strategic Studies (NIPPS) in 2007, demoted in August 2008 to a Deputy Commissioner of Police and frustrated out of the Nigeria Police Force.

He was reinstated by ex-President Goodluck Jonathan culminating in his retirement as an Assistant Inspector-General of Police (AIG).
President Muhammadu Buhari is yet to make up his mind on who heads the EFCC despite the intense jostle for the job.

Investigation by our correspondent revealed that lobbying for the office of the EFCC chairman has delayed a definite pronouncement by the President on Magu, who has acted in the role for four years.

It was learnt that plot to “push Magu to NIPPS through the backdoor” could not sail through because no one was prepared to offend President Buhari.

The race for the office was compounded in the last one week by the interest of “very close” aides to the President, it was learnt on Thursday.

A source said: “Following the end of the tenure of the 8th Senate and the exit of ex-President of the Senate, Dr. Bukola Saraki, it was assumed that it will be an easy ride to re-nominate Magu as substantive chairman of EFCC.

“Since August, a memo has been in the works to re-present Magu to the 9th Senate but it has got stuck due to intrigues over the post within and outside the Presidential Villa.

“So far, we have four top police officers, including a retired Commissioner of Police, jostling to displace Magu. Two “very close” aides to the President are the latest entrants. These have the backing of the powers that be and they wield much influence.

“Magu’s achievements do not count to these aides and their backers. The only thing working for the Acting EFCC chair is his stellar performance since 2015. Being from a poor home with limited connections due to the nature of his job, Magu is looking forward to God and President Buhari to decide his fate.”

Investigation revealed that a governor from the North, who used to be the arrowhead of lobbyists for Magu’s re-nomination has backed out because the Acting chairman of the EFCC has refused to bend the rules.

The governor is unhappy that the EFCC has been probing the accounts of his state, following the interception of some suspicious payments.
His assumption is that it will be difficult to control EFCC under Magu.

“The Acting EFCC chairman is insisting on fairness to all whether a friends or not. He said the ongoing investigation does not mean the governor is corrupt. He feels that the governor might not be aware of a systemic challenge in his government which he needs to address to block leakages.”

Another source added: “We have a few other former and serving governors of the All Progressives Congress (APC) who do not want the President to retain Magu. They alleged that if Magu gets a substantive appointment, he might be more “punchy.”

“The argument of the police chiefs are selling the ‘Ribadu treatment’ for Magu is that he ought to grow professionally instead of remaining with the EFCC.

“The challenge they have is that they do not know how the President will react if Magu is sent to NIPPS without Presidential approval.”