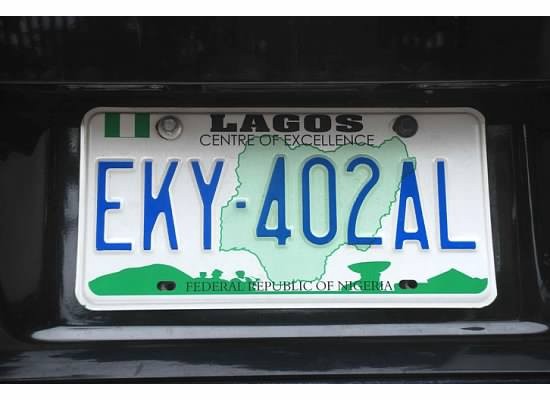 Daily, I receive calls, text messages and emails from motorists seeking clarification on the position of the law with respect to the indiscriminate removal of vehicle number plates by law enforcement agents. I will refrain from reprinting the comments of some of these callers who often express disgust over these actions described by some as annoying. I recall vividly the most recent call from an old friend who could not hold back his frustration while narrating his experience to me.

According to Yinka Jazman(not real name), he said he was driving along the Lagos Ibadan when he was pulled over by a law enforcement operatives for certain offences. After series of questions on certain infractions, one of the operatives walked away only to appear with a screw driver which he used to unscrew the vehicle number plates and then asked me to report to the office the next day. A second caller was not as lucky as Yinka as his rear vehicle number plate was forcefully removed with bare hands.

What really is the position of the law? First, I wish to state here that it is illegal for any law enforcement operative to engage in removal/confiscation of number plates from a vehicle. This how the Federal Road Safety Corps captured it in a recent clarification: for appropriate guidance, the following provisions of the law are instructive: Section 10(4)(h) of the FRSC (Establishment) Act, 2007 states: that its an offence to be on the road without a valid vehicle licence or identification mark being displayed. Similarly, Section 10(4)(s) of the Act makes failure to display number plates on vehicles an offence.

The National Road Traffic Regulations (NRTR) 2012 also provide as follows: Section 36(NRTR) 2012 makes it mandatory for all private and commercial vehicles to have number plates which shall be fixed on them in a manner as not to be easily detachable.

Section 36 states that All private and commercial vehicles shall as from the commencement of these Regulations have on them Vehicle Identification Number Plates which shall -Be carried by the motor vehicle on two plates which shall conform to the requirements of these regulations; and the number plate shall be fixed-in such a manner that each is not easily detachable; and in an upright position or within 15 degrees of such position. Section 39(a): states that “All vehicles private and commercial shall have on them vehicle identification number plates and shall be an offence for any vehicle not to have the said number plates”.

In Section 37- (1)of the same Regulations, it states that The Identification Number Plates carried by a motor vehicle or articulated vehicle shall be displayed on two plates for a motor vehicle and three plates for an articulated vehicle and shall conform as to lettering, numbering and otherwise with the provision set out in figures 1-11 of schedule 5 to these regulations. The number plates shall in respect of a motor vehicle be fixed, one on the front of the vehicle and the other at the centre or on the off side of the rear of the vehicle or as may be provided by the manufacturer. In respect of a trailer, one should be fixed on the front of the vehicle and two at the rear of the trailer in an upright position. For a motorcycle, one plate shall be fixed in front and one at the rear with the plate having white background but blue lettering for private green lettering for the Federal, State or Local Government, black lettering for the Armed Forces, Paramilitary Service and red lettering for commercial, so that every letter or figure on the plate is up- right and easily distinguishable in the case of the front plate from behind. In the case of the recovery of a semi-trailer, the operator of the prime mover shall be required to ensure that the entire articulated vehicle carries the same identification number in respect of the prime mover and the semi-trailer. Each Identification Number Plate must be reflective and so made that any letter, numeral or other identifying mark displayed on it are legible at day time and at night in clear weather and must be visible and recognizable at a distance of not less than 60 metres by the driver of the immediate following vehicle and in the case of motorcycle at a distance of 30 metres.

The Regulation further states in Section 38-(1) that a vehicle shall carry a Vehicle Tag as specified in Form MVA 25 of schedule 5 to these regulations which shall be issued along with the Vehicle Number Plate and shall carry the same number with the plate and be affixed to the rear windscreen. Except as otherwise provided under these regulations, number plates shall be transferred from one vehicle or trailer to another; Number plates shall be attached to a person and not to a vehicle and that Number Plate shall be returned to the Motor Licensing Authority on sale of a car and the new owner shall obtain new set of number plate; while Proof of Ownership Certificate is mandatory for issuance of new number plates. All of these provisions cited explain why driving with one number plate or none at all is illegal.