Nuns Who Are Healing The World With Marijuana 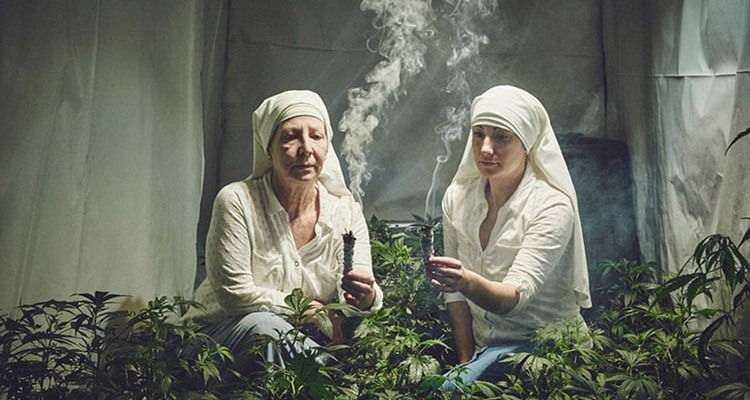 Sister Abbey lives just outside Merced, California. Sister Kate lives close by with Sister Darcy and her youngest son. They posses the discipline, dedication and empathy required to live a life of a nun, although they aren’t members of any religious order. Sisters Kate and Darcy may call themselves nuns, but their spiritual quest is on quite a different path- to heal illnesses with the help of marijuana.

The unordinary nuns are the subject of photographers Shaughn Crawford and John DuBois. They dress the part, in long denim skirts and white collared shirts, and just so happen to be licensed marijuana growers operating out of their kitchen.

The Sisters of the Valley grow weed in conjunction with the moon cycles to make a variety of healing remedies, which they sold on Etsy. Each salve is made with the sisters’ love and each jar is shipped with a prayer for healing.

Although the women are licensed, their business came under threat from a legislation passed last year. Because of a mere typo in the Medical Marijuana Safety and Regulation Act, the billion-dollar industry has seen local bans on the cultivation, distribution and sale of the drug in the California state.

The bill accidentally set a March 1st, 2016 deadline for cities to impose individual regulations or bans on medical marijuana, otherwise they would have to follow state rules. The city manager of Merced is standing behind the bill, stating that, “We’re banning it for now because if we don’t, we’ll have no local control.”

The Sisters begin each day with “Bible time”, a term they use for conducting business via email, Etsy, Facebook, Twitter and other social media platforms. The media attention has caused a surge of orders for the duo that left them days behind on email correspondence – “a cardinal sin,” said Sister Kate.

The pair has certainly not shied away from press attention, including the possibility of a film, but their beliefs remain sincere in the healing properties of CBD and the willingness to help the sick.

Using cannabinoids, the medical component of weed that is not psychoactive, their medicine aims to reduce frequent seizures. Their homemade salve is aimed to aid migraines, earaches, rashes, toothaches and even hangovers.

Unfortunately, their store has officially been shut down on Etsy, but that doesn’t mean the Sisters have given up. They began raising funds to “Save the Sisters’ Business,” but the sudden stop of sales has continued to increase the financial burden. Raising enough money would help them get their business back up and running, perhaps even as a wholesale program to reach more people in need.

The Sisters of the Valley aren’t listening to the Government legislation – they answer to a much higher power. When they make their medicine, “it’s a prayerful environment, it’s a prayerful time.”