Pastor Teaches With A Lady On How To Make Love (Video) 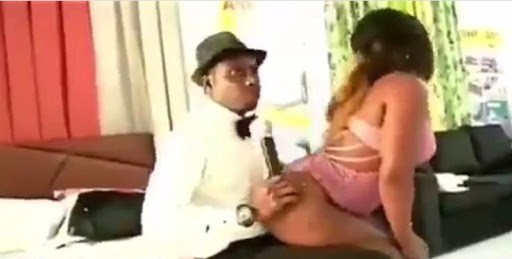 An outrageous video has emerged online showing a Ghanian pastor who took it upon himself to teach sex education to his church members.

In the now-viral video, the man of God who was trying to boost the sex life of his congregation was seen using a woman to practicalize some sex scene. He describes a few thrusting techniques and shows off some sex positions while his church members watch and laugh in amusement.

He emphasized the doggie style and said that the lady should hold a higher bom-bom level, while supporting herself on the bed and flattening her back on the bed. He sat on the bed that was brought to the service for demonstration and made the lady, whom was on a bikini outfit during the service sit on his laps like they were about to have a lap dance. He said the man should suspend.

“You go, the higher, are you getting the picture. Now number two, for her she is flat (Ghanaian language) …are you getting it, okay. So, she come up my dear…She goes like this, we are still at the edge in the same way then I come at the edge of the bed like this, then she is back on the same site and sound, she is still in the bending position, go forward small you are too…. SUSPEND…eeehen, so you suspend. Now, man when you suspend….”

The video has generally been condemned with many calling the man of God ‘end time pastor’.