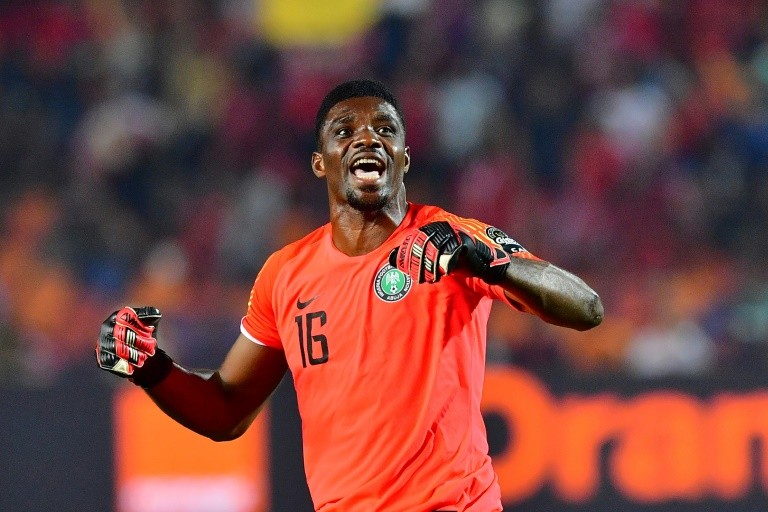 An Akpeyi blunder contributed to Chiefs losing their last South African Premiership match two weeks ago and he was replaced by fans favourite Itumuleng Khune for a cup tie.

German Middendorp said early this week he would recall Akpeyi for the crunch clash with Pirates, then appeared undecided before sticking with his original decision.

The pressure was on the 33-year-old Nigerian, who has mixed brilliance with blunders in the past, and he responded magnificently with a string of superb saves before a 90,000 crowd.

Lebogang Manyama scored the only goal on 30 minutes to earn leaders Chiefs three vital points at Soccer City stadium as they seek a first league title in five seasons.

Serb Samir Nurkovic created the match-winner with a pass to Manyama, who took advantage of hesitant Pirates defending to dart forward before firing a low shot into the net.

Pirates had numerous chances to equalise before and after half-time only to be repeatedly foiled by breathtaking saves and blocks from Akpeyi.

Victory lifted Chiefs to 48 points from 21 matches, seven ahead of defending champions Mamelodi Sundowns and nine in front of Pirates, who have played one match more.

“Daniel was brilliant, but I am very proud of all my players,” said Middendorp, who has not lost in eight Soweto derbies during two spells as Chiefs coach.

“I hope everyone — the players, technical staff, management and supporters — enjoy this critical victory in the title race.

“As for the championship run-in, it is all about mentality now. Each of the nine matches will present unique challenges and it is up to us to handle them correctly.”

“It was tough facing one of the best teams in the league and I believe we deserved a little more from the match,” he said.

“We dictated play at times only to be let down by poor final passes and, of course, the brilliance of the Chiefs goalkeeper.”

Chiefs still have to face Sundowns, and title long-shots Bidvest Wits twice, as they seek to end the longest trophy drought since the club was formed in 1970.

But completing a league double over Pirates for the first time since the 2005/2006 season can only boost the confidence of a club that has won 53 domestic trophies.

The Soweto derby is one of the “big five” single-city derbies in Africa and regularly draws 90,000 crowds to the stadium where Spain beat the Netherlands in the 2010 World Cup final.

Other hugely popular fixtures include Al Ahly against Zamalek in Cairo, Raja verus Wydad in Casablanca, USM and Mouloudia in Algiers and Esperance versus Club Africain in Tunis.