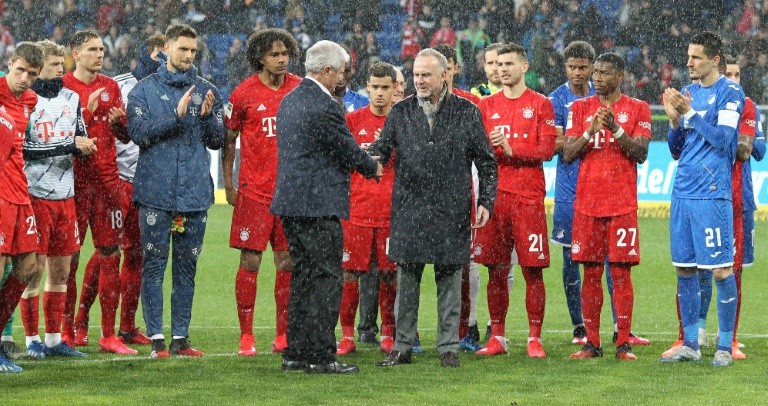 The game in Hoffenheim finished in bizarre circumstances with both teams passing the ball between each other after a lengthy delay over an offensive banner in the section housing travelling Bayern supporters.

Players from both sides stood on the field but refused to play for the final 10 minutes as the clock wound down.

Rummenigge said he was “deeply ashamed of these chaotic people” who have “discredited the name of FC Bayern”.

The entire Bayern team — along with coach Hansi Flick and Rummenigge –- approached the ultras block and pleaded with fans to remove the banner.

“Today, at the absolute latest, the moment has come when the entire Bundesliga needs to take action against these chaotic people.

“We must all stand together. We have closed our eyes for far too long. This is the ugly face of football.”

German Football Association boss Christian Seifert indicated after the match that no action would be taken against either side.

In a statement, Seifert said both sides “acted in an exemplary manner in this situation, thereby sending a clear signal to some self-appointed rules of football culture not to tolerate such conduct any longer.”

The fans refused to withdraw the banner, prompting a surreal conclusion to a match in which Bayern overcame the absence of injured striker Robert Lewandowski.

With five names on the scoresheet, first impressions suggest that Bayern will have few problems replacing Lewandowski’s 25 goals during his expected month-long absence.

Bayern burst out of the blocks, with Serge Gnabry scoring the visitors’ first after just two minutes when he connected with a floating ball from Thomas Mueller.

Joshua Kimmich made it 2-0 just five minutes later, side-footing a loose ball in the box past Oli Baumann. From there on it was one-way traffic for the 28-time Bundesliga champions.

Dutch teenager Joshua Zirkzee scored his third goal in the top flight, chipping in a ball from Kimmich in the 16th minute, before Philippe Coutinho made it 4-0 in the 33rd minute with a trademark curling strike into the top corner.

The Barcelona loanee scored his second and Munich’s fifth just two minutes after the break, toe-poking in a superb assist from Mueller, giving the latter his second of the match and his 17th assist of the season.

Leon Goretzka was the next to get on the scoresheet, profiting from an excellent team movement. Coutinho and Corentin Tolisso combined perfectly in the box before Goretzka lifted the ball over Baumann to rack up Bayern’s sixth.

Elsewhere, Dortmund kept pace with the league leaders with a hard-fought 1-0 win over Freiburg at a windswept Signal Iduna Park.

Dortmund grabbed the lead through Jadon Sancho in the 15th minute, with the Englishman converting a pinpoint assist from Thorgan Hazard to bring up his 14th goal of the season.

Freiburg went close to finding the equaliser in a nervous final 15 minutes for the home side, however Dortmund’s defence held firm as they drew level on points with second-placed RB Leipzig.

Borussia Moenchengladbach also kept pace, moving into outright fourth with a 3-2 win away at Augsburg.

Lars Stindl scored two for the visitors, while Ramy Bensebaini also got on the scoresheet.

Schalke have won only once in the Bundesliga since mid-December and are losing their grip on the European placings.

Cologne fans also rolled out a banner, this time targeting the German FA’s decision to ban away fans at games between Dortmund and Hoffenheim for the next two years, saying it amounted to “collective punishment”.

Cologne captain Jonas Hector said he supported the fans. “Why should 20,000 people who have supported us for the entire 90 minutes be punished for the actions of a few?”