Mbaka’s Disgrace By The Presidency: A Lesson For APC Stooges 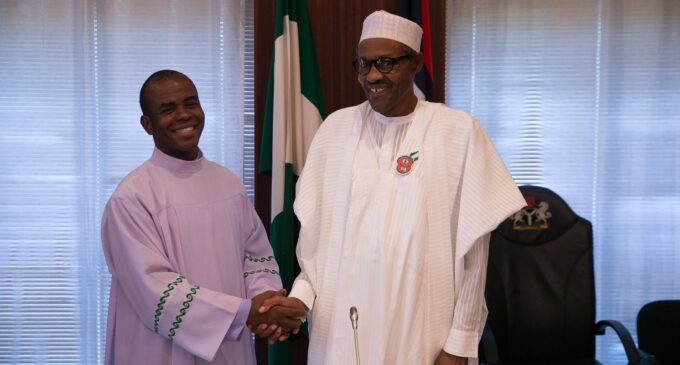 For the umpteenth time, Reverend Father Ejike Ebenezer Mbaka, a Catholic Priest, founder, and Spiritual Director of Adoration Ministries Enugu is being dragged in the mud over his romance with the devil after a failed political outing, the lessons embedded in his recent ignominy leaves a plethora of lessons for his co-travelers who have made themselves useful tools for the feudal APC government – the monster they all collectively enthroned in 2015.

The raging trouble ensued after the controversial Christain cleric spoke out against the president’s ineptitude in the face of the mind-boggling insecurity currently ravaging the country which has degenerated to the point where life is seemingly becoming more intangible with every passing day.

The name Mbaka is not new in Nigeria, especially in the political scene. The Enugu-based cleric has become part of a growing number of pulpit merchants, priests, preachers, and ‘big men of the big God’ who have not only become powerful in Nigeria but also command vast following beyond Africa. The truth remains that these ‘men and women of God’ (As they are often referred to in Africa) have assumed (for better or for worse) some sort of legendary and mythical status and inhabit hallowed sacred chambers with their ‘miraculous powers,’ inspirational and hope-filled messages, spiritual claims and their highly questionable and unusual mysterious encounters with God. However, this is not unforeseen considering the fact that they operate in a country with no critical culture, blind faith, and often shallow-minded sheeple; putting all the above mentioned in perspective, it’s easy to understand how people like Mbaka command a very huge following. Gullibility has indeed added to the vulnerability imposed on the people by poverty, horrible, and worsening socio-economic conditions, and what have you. Interestingly, the poor who make up the congregation are as impatient as the politicians who have made them poor so it’s easy for the clever ‘men of God’ to step in to provide the much-touted succour.

Mbaka would have been better off had he maintained his ‘lane’ and avoided the ugly incursion into politics while sustaining his grip on his congregants, please make no mistake about it, as a ‘man of God’ who commands a multitude of followers, there is nothing wrong with speaking up against bad governance, poor leadership or corruption in public offices, in fact, that’s what is expected of every individual that has a ‘loud’ voice, Mbaka is singled out here because his prophetic messages are nothing short of a direct entry into politics. Mbaka even goes as far as bringing partisanship into his proclamations.

Mbaka’s ‘prophetic’ gimmicks sometimes serves the purpose of whipping unassuming politicians into the line, one cannot forget in a hurry, how the controversial priest conclusively sealed the fate of the former governor of Anambra State – Peter Obi who was running mate to Atiku Abubarkar in the 2019 Nigerian General elections simply because Obi refused to water his political altar with wads of cash. To Mbaka, his prophecies are measured by how much you can give him and not actually what he hears from ‘God’ as his multitude of followers has been deceived into believing.

Whichever way one chooses to look at it, the Enugu-born Christain cleric has been enjoying a flourishing venture. The business of making well-timed political predictions under the garb of prophetic declarations embellished in deceitful spiritual underpinnings. He always gets away with it because his congregation and admirers are people who often exhibit a most regrettable propensity to intellectual indolence. You won’t blame them that much, would you?

On the first of January 2015, Mbaka announced to the knowledge of the whole world that his ‘God’ has just shown him the messiah that would pull Nigeria out of the doldrums. According to the Priest, Muhammadu Buhari was the messiah and the former military dictator was going to displace the incumbent Goodluck Jonathan at that time in the presidential election which was slated 3 months away. The ‘prophesy’ elicited mixed feelings amongst Nigerians. When the nation’s electoral umpire announced to Nigerians that Muhammadu had indeed won the elections, Mbaka’s stocks grew. No wonder why he wasted no time in ensuring that he paid the newly elected president a ‘courtesy’ visit almost as soon as he was sworn in.

Things however went sour between the prophet and the beneficiary of the ‘prophecy’ last week when the former announced to the same congregants that the initial messiah was proclaimed in error and that he should vacate the office by quietly resigning or face an ‘unusual’ impeachment. many Nigerians were left bewildered by the sudden U-turn. Some wondered if ‘God’ was actually telling lies when he mandated Mbaka – his mouthpiece to tag him a messiah. With people like presidential media spokesperson Garba Shehu who has now earned himself the nickname Garbage Shehu, Mbaka wasn’t going to get away with it this time so a reputational damaging press release was written and published on Mbaka. Mbaka was accused by the Presidency of bringing three contractors to Aso rock to see the president with the aim of getting ‘compensated’ for his hard work for the president and his party, The All Progressives Congress (APC).

The fact that Shehu Garba found it very convenient to wash Mbaka’s dirty linen in the market square is indeed petty but that was actually very deserving. You can’t deceive people by fabricating miracles, oracles, and predictions to achieve a self-serving end and expect not to be disgraced when it backfires. Telling lies and hiding under prophetic anointing and Heavenly directions is a moral transgression that should never be forgiven if human beings had such powers. Mbaka goofed. He should soak up whatever dirt that is thrown at him.

Then again, as they often say, throwing away the baby with the bathing water is wrong. Mbaka’s call on the President to either resign or be impeached was right. The era of currying public sympathy is long gone, any clever analyst would notice how Garba Shehu tried to make the metaphorical integrity and imaginary piety of Buhari the focal point in the diatribe lashed out at Mbaka, Garba forgot that the issue on the table was insecurity and not political press releases in anticipation of an election. In the just-ended week, about 227 Nigerian citizens were documented killed by bandits, another 46 killed were mowed down by terrorists, a further 8 kidnap victims were murdered in cold blood by their abductors, over 30 soldiers paid the supreme price even as 21 policemen were killed by unknown gunmen not minding the fact thousands are still held captive by criminal elements while thousands are currently displaced and left in a state of hopelessness. The president’s dangerous silence has been baffling and mind-wrenching. He has failed to tackle the insecurity ravaging the land like a General. His apparent aloofness to the chaos that has engulfed the country is eternally impeachable, Mbaka’s call was spot on!  A more humane president would have resigned even without being asked to do so. He has failed abysmally and that’s an indisputable fact. That Mbaka asked for contracts is not a justification for why Bandits and criminals now run Nigeria like a private estate.

Finally, Mbaka’s sojourn in the land of the spirits should serve as an eye-opening lesson to his fellow pulpit merchants. A supposed ‘prophet’ shouldn’t contaminate his calling with quid pro quo prophecies!. Then again, to the useful slaves especially those from the Southern part of Nigeria, if you are so blind not to learn from Mbaka’s disgrace, then your head may just be the next tool for breaking the next coconut. A government that openly defends a serving cabinet minister who is a known terrorist and chastises a preacher who asked for contracts for his friends should be given the long spoon.