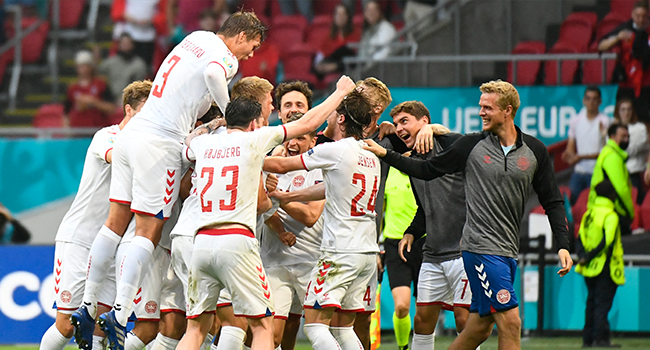 Wales’ Euro 2020 adventure is over after they were outclassed by Denmark in Amsterdam and beaten 4-0 with Kasper Dolberg scoring twice and Joakim Maehle also on target.

Robert Page’s side arrived in the Dutch capital in an understandably confident mood having advanced from Group following a win over Turkey and a draw against Switzerland.

Wales were only narrowly beaten by Italy in Rome last weekend and started well against the rejuvenated Danes with Gareth Bale sending an early warning shot across the bows, but his venomous shot from 20 yards fizzed just wide of Kasper Schmeichel’s right-hand post.

Having weathered the early storm, Denmark grew into the contest and began to exhibit the fluency that helped them sweep aside Russia so convincingly in their final group game. And it was no surprise when one particularly impressive move ended with Mikkel Damsgaard feeding Dolberg and the Nice forward curled his shot beyond Danny Ward.

Wales just about managed to limit the damage for the remaining 18 minutes of the half but gave themselves a mountain to climb just three minutes after the restart.

There appeared little danger when Martin Braithwaite’s cross reached Neco Williams at the far post, but the Liverpool full-back rushed his clearance and when the ball fell at Dolberg’s feet, he slammed a shot from close range past the stranded Ward.

Bale and Aaron Ramsey tried to mustre a response, but the Danes comfortably negated their threat and look increasingly capable of progressing to the latter stages of the tournament, having recovered from the blow of losing Christian Eriksen in such emotional circumstances earlier in the competition.

Kasper Hjulmand’s men were carving out opportunities at will during the closing stages and Maehle rounded off another sweeping move, cutting back onto his left foot and smashing home from 10 yards.

And worse was to come, moments after Wales were reduced to 10 men after Harry Wilson was sent off, Braithwaite completed the rout with another astute finish following a delicious lay-off from Andreas Cornelius.