2023: Tinubu Can Fully Count On Me, El-Rufai Declares 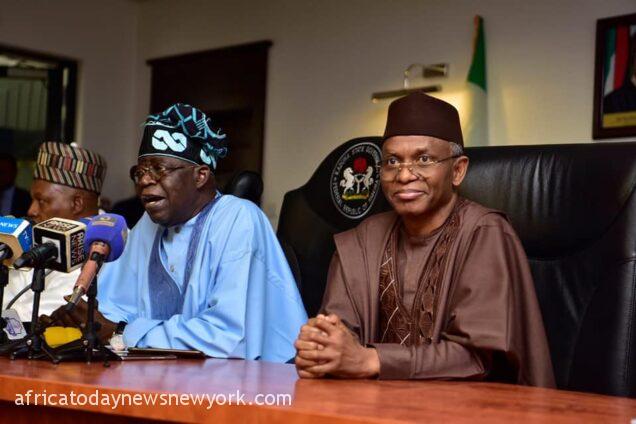 Kaduna State Governor, Nasir El-Rufai has openly declared his support for the presidential aspiration of the national leader of the All Progressives Congress (APC), Asiwaju Bola Ahmed Tinubu asking the former Governor of Lagos State to fully count on him.

El-Rufai made the declaration at the Murtala Square in Kaduna where the national leader of the APC, accompanied by the former Governor of Borno State, Kashim Shettima, former EFCC boss, Nuhu Ribado and other dignitaries canvassed support from delegates

Shetimma had earlier assured the delegates that the Kaduna State Governor, Malam Nasir El-Rufai was “solidly by their side.”

However, while speaking, El-Rufai said he would need the support of delegates from Kaduna State to take a decision.

“Before we confirm what Kashim Shetima said here, I want to confirm from our statutory delegates are you with Asiwaju?” El-Rufai asked, to which the delegates stood in unison, shouting yes.

“Your Excellency, I do what they tell me, they are my bosses. This is how APC in Kaduna works,” he said.

Tinubu, has submitted his Nomination and Expression of Interest forms to the secretariat of the party after successfully completing them.

The APC National Leader was represented by Governor Babajide Sanwo-Olu of Lagos State; a former Secretary to the Government of the Federation, Babachir Lawal; pioneer Chairman of the Economic and Financial Crimes Commission, EFCC, Nuhu Ribadu, amongst others.