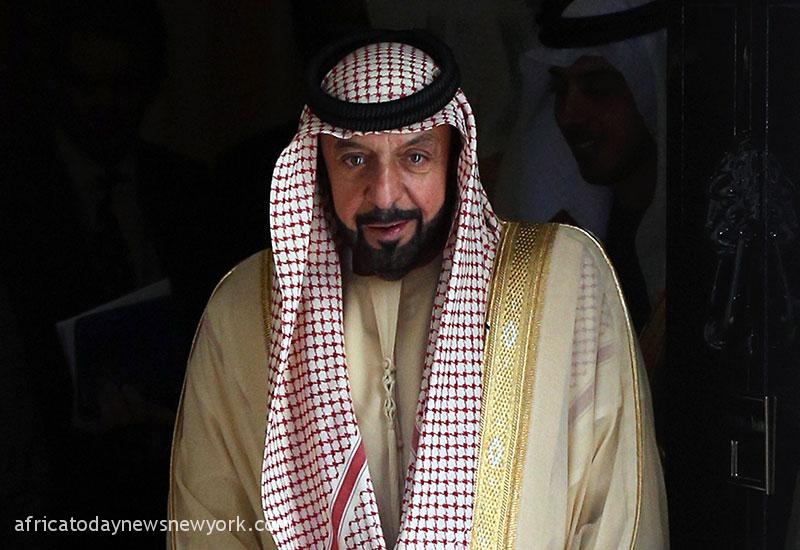 The State news agency WAM reported this on Friday in a program which was monitored by Africa Today News, New York.

‘The Ministry of Presidential Affairs condoles the people of the UAE and the Islamic world… on the passing of Sheikh Khalifa bin Zayed Al-Nahyan on Friday, May 13,’ WAM said.

The ministry announced 40 days of mourning with flags at half-mast from Friday, with work suspended in the public and private sector for the first three days.

Sheikh Khalifa took over as the UAE’s second president in November 2004.

He succeeded his father as the 16th ruler of Abu Dhabi.

Under the constitution, vice-president and premier Sheikh Mohammed bin Rashid al-Maktoum, ruler of Dubai, would act as president until the federal council which groups the rulers of the seven emirates meets within 30 days to elect a new president.

Khalifa, born in 1948, had rarely been seen in public since suffering a stroke in 2014 and his half-brother Abu Dhabi Crown Prince Mohammed bin Zayed, known as MbZ, has been the de facto ruler of the U.S.-allied UAE, an OPEC oil producer.

Meanwhile, Vice President and Prime Minister of the UAE and Ruler of Dubai His Highness Sheikh Mohammed Bin Rashid Al Maktoum said in post on Twitter: ‘Oh God, we witness that Khalifa bin Zayed has fulfilled his trust.. and served his flock.. and loved his people. Oh God, his people have been satisfied with him.. so be pleased with him.. and cover him with your mercy.. and put him in your vast gardens.. and inspire us and inspire his people, his family and his loved ones patience and solace.. we belong to God and to Him we shall return.’

The Sheikh has been credited for steering the development of the oil and gas sector and the downstream industries that have successfully contributed to the UAE’s economic diversification.