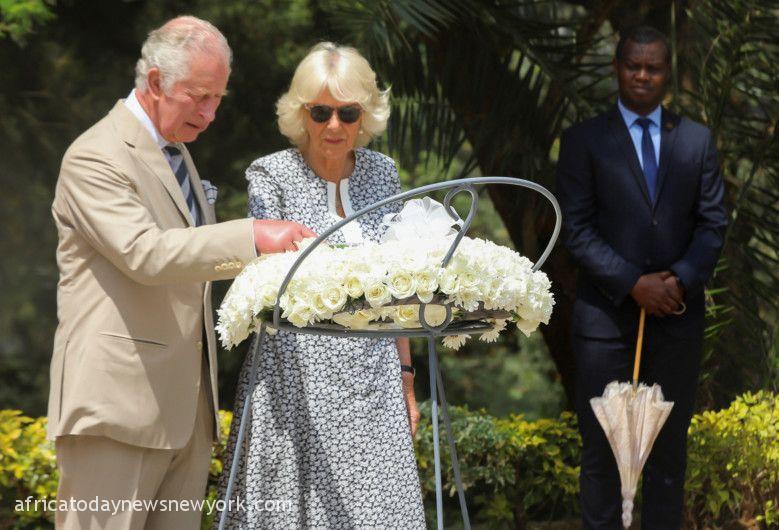 On Wednesday, Prince Charles laid a wreath at a memorial to the 1994 genocide in Rwanda during the first visit to the country by a British royal.

At the Kigali Genocide Memorial, the final resting place for more than 250,000 victims of the murders nearly three decades ago, the Prince of Wales and his wife Camilla took a moment to pay silent respect.

A wreath of white flowers was delivered with a note of remembrance that the royal couple signed.

They also spoke with survivors of the genocide in which some 800,000 mainly Tutsi people were murdered by Hutu extremist forces between April and July 1994.

Housing skulls, bone fragments, and shreds of clothing, the memorial is a testimony to the horrors of the genocide and a customary stop for foreign dignitaries visiting Rwanda.

Africa Today News, New York reports that Charles and Camilla also toured the memorial museum where they viewed photographs of the victims and their possessions and heard personal accounts of the killings.

The royal couple touched down late Tuesday in Rwanda where the Prince of Wales is representing his mother, Queen Elizabeth II, at a Commonwealth summit this week.

The leaders of many Commonwealth nations are expected in Kigali in the coming days for the meeting of the 54-member club of mainly former British colonies.

Rwanda, a former German and Belgian colony, joined the Commonwealth in 2009 and has in recent years moved closer to the English-speaking world.

The royals and their hosts smiled for photographs flanked by the flags of their respective countries before commencing a private meeting.

Ahead of the Commonwealth summit, Charles had reportedly criticised a migrant resettlement deal hatched between Kagame and British Prime Minister Boris Johnson as “appalling”, setting the scene for an awkward encounter in Kigali.

The UK government said Wednesday it would introduce legislation allowing it to ignore certain European Court of Human Rights decisions after a judge in Strasbourg blocked flights removing asylum seekers to Rwanda.

Inaugurated in 2004 during the 10th anniversary of the killings, the Kigali Genocide Memorial has an education centre, a garden, library, and a 1,200-seat amphitheatre that hosts workshops, plays, and films.

It contains three permanent exhibitions and clubs, machetes, arrows and other tools used in the massacres are on display.