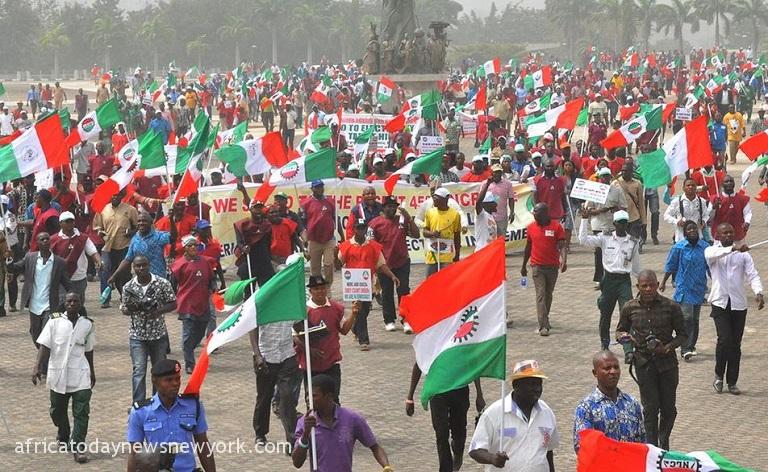 In lieu of the given directive which had been handed down by the leadership of the Nigeria Labour Congress, NLC, which had detailed them to immediately embark on mass protests across the country in support of the demands which had were being pushed by the Academic Staff Union of Universities, ASUU, the Ekiti State chapter of the congress on Tuesday had also embarked on a protest that caused a gridlock in some of the major areas of the state capital, Ado-Ekiti.

The NLC members barricaded the roads in Ado-Ekiti, the state capital, with various inscriptions on their placards.

The Student’s Union also joined in the protest as they all slammed the “non challant attitude and insensitivity of Federal Government to the plight of the lecturers”.

Some of the Motorists and commuters had been stranded for hours as some of the economic activities were paralyzed during the protest. The road had been blocked and there was no representative of government that showed up at the House of Assembly to receive or address the protesters.

The workers described the action of the government as “disrespectful”.

In his remark, the NLC Chairman, Comrade Kolapo Olatunde, who declared the protest as the tip of the iceberg, said:

“We solicit the support and intervention of the state government in the matter of the dispute between the Federal Government and the unions in the tertiary education subsector.

“This dispute has manifested in a strike action for the past five months and has come at a huge cost to the students, the university staff, parents, the government, other stakeholders and the entire country.

“The strike is over the non-observance by government of the agreement it voluntarily entered into with the unions.It has also been about imposition of IPPIS on the university unions to which they have taken objection with credible reasons.

“We are dismayed by the federal government paralysis and reluctance to take the necessary step that could lead to the peaceful resolution of the issue in dispute and by extension ,end the strike.”