Details Of Tinubu, Shettima’s Meeting With Buhari In Abuja 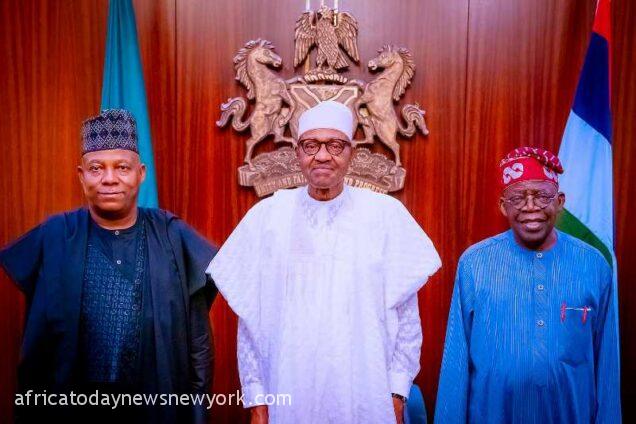 At the meeting, Adamu had informed the president that Lalong has been made the Director-General, APC Campaign Council while Festus Keyamo, Minister of State for Labour and Productivity is the spokesman of the council. Katsina-born lawyer Hannatu Musawa will serve as Keyamo’s deputy.
The meeting was to brief the president about progress being made to actualise the presidential ambition of Asiwaju.
The APC presidential candidate is aspiring to become the president of Nigeria next year to replace Buhari, whose tenure will expire on 29 May, 2023.
The Independent National Electoral Commission (INEC) has fixed September 28 for presidential campaign to kick-off.
Tinubu, 70, is a Nigerian accountant and politician who served as the Governor of Lagos State from 1999 to 2007 and Senator for Lagos West during the brief Third Republic. In June 2022, he was chosen as the All Progressives Congress nominee in the 2023 Nigerian presidential election. He will be slugging it out with the PDP Presidential candidate, Atiku Abubakar, the Labour Party candidate, Dr. Peter Obi, among others.

In another report, Ahead of next year’s general elections, the Vice-Presidential candidate of the All Progressives Congress (APC), Senator Kashim Shettima, has assured Nigerians that when elected, the Bola Tinubu administration would run a just and inclusive government, irrespective of tribal, religious, and political affiliations.

Senator Shettima made this promise while speaking at the one-year memorial service for Dr Emmanuel Abiodun, father of the governor of Ogun State, held at the St. James Anglican Church, Iperu-Remo, Ikenne Local Government Area in Ogun State.

His words: ‘We need to build a new nation because the hope of the black man is on Nigeria. The onus is on us to secure the future of our children yet unborn.

‘I want to assure Nigerians that we are going to be just and fair to all. We are going to be all-inclusive because no society can thrive on injustice. Ours will be an all-encompassing, all-embracing government.

‘We will build a country of our dreams where people are judged by their character irrespective of their political affiliations, religious persuasions, sectional or tribal ground.’