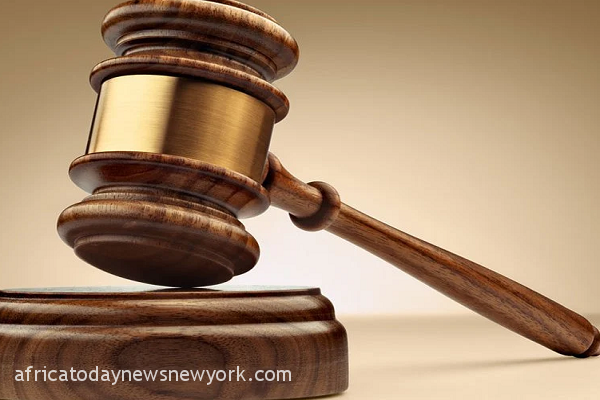 No Fewer than 20 Ghanaian fishermen, were yesterday sentenced to one-year imprisonment each by a Federal High Court in Lagos State for transporting 13.670 kilogrammes of marijuana, aka cannabis sativa, from Ghana to Nigeria.

The presiding Justice Nicholas Oweibo convicted and sentenced them after finding them guilty of the charges of conspiracy and unlawful transportation of the drug.

Africa Today News, New York gathered that the convicts were arrested with the drug conveyed from their country into the Nigerian territorial waters on January 14, 2022.

They were arraigned on two counts of conspiracy and unlawful transportation of the substance.

The prosecutor, Mr Fingere Owen, told the court that the offences were contrary to and punishable under sections 11(b) and 14(b) of the National Drug Law Enforcement Agency Act Cap. N30, Laws of the Federation of Nigeria 2004.

The defendants pleaded guilty to the charges.

Following their guilty pleas, the prosecutor reviewed the facts of the case.

Owen also tendered some exhibits and urged the court to convict and sentence them in accordance with the sections they were charged with.

However, lawyers to the convicts, Mr Uche Okoronkwo, who led Calistus Onyewueke, both of Minerva Legal Practice, told the court that all the defendants were first time offenders without previous criminal records.

Okoronkwo told the court that his clients were fishermen, who were engaged by a purported customer, who did not tell them the content of the bag.

Justice Oweibo sentenced them to one-year imprisonment each.

The judge also ordered that the sentence should commence from the date of their arrest.

He, however, ordered the convicts to pay the sum of N50,000 each in lieu of the sentence and ordered that the boat used in smuggling the banned substance be forfeited to the Federal Government.