Aug 17, 2022 apc:, Asiwaju Bola Tinubu who is the All Progressives Congress, Presidential candidate 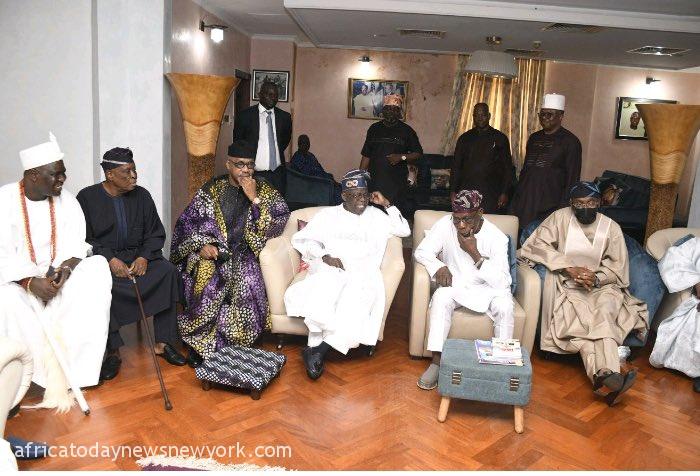 Asiwaju Bola Tinubu who is the All Progressives Congress, APC, presidential candidate has on Wednesday met with the former President of Nigeria, Olusegun Obasanjo despite their fallout in recent times.

The meeting which had been held between Obasanjo and Tinubu was behind closed doors at the former president’s residence in Abeokuta, the Ogun State capital.

It has also be revealed that Obasanjo’s meeting with Tinubu may not be entirely unconnected with the former Lagos State governor’s presidential ambition despite the fact that they have been recently bashing each other.

Tinubu had been accompanied by the Ogun State Governor, Dapo Abiodun, former Governor Gbenga Daniel, and Speaker of the House of Representatives, Femi Gbajabiamila, among others.

In another report, His Royal Majesty Abdulrosheed Akanbi who is the paramount ruler of Iwoland has put out an open warning to the presidential candidate of the All Progressives Congress (APC), Bola Tinubu while reiterating his earlier request for him to get to reconcile with all the aggrieved Yoruba leaders, stakeholders and politicians ahead of the 2023 general elections.

In his statement entitled ‘2023: Forgive Each Other, Oluwo Urges Yoruba Leaders, Politicians’, the Osun monarch had made an appeal to Tinubu to avoid any form of bitterness among Yoruba leaders which cost the presidential ambitions of the late old Premier of the Western Region, Dr Obafemi Awolowo and the late business mogul, Chief MKO Abiola.

Oba Akanbi asked all Yoruba leaders to forgive one another and end the rancour among them, as he reiterated his support for Tinubu to succeed President Muhammadu Buhari next year.

The traditional ruler said these in a statement made on Monday while stressing that the appeal becomes necessary to have a united Yoruba family ahead of the 2023 general election. He had also noted that such a move will make the election a free ride and write a new history for the Southwest region by promoting political unity and understanding among themselves for the former Lagos state governor to contest and win.