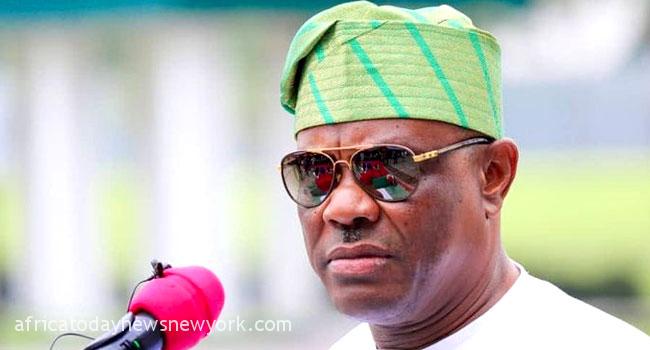 The Rivers State Governor, Nyesom Wike has revealed that he is going to be leaving his office as a happy man come 2023 due to his policies that he has achieved.

Wike had also noted expansively that he is actually happy to be leaving office at this time because his administration has not disgraced the people while adding that he has fulfilled all his promises as well.

He spoke during the flag-off of a flyover project in Obio/Akpor Local Government Area of the state on Thursday. Wike said only failed leaders move around with security details after leaving office.

According to Wike, “Already, I am leaving. In the next few months, I am gone but I am happy going because my people are happy I did not disgrace them.

“I am going without having any policemen following me on the streets. There is nobody that can touch me in any street because I have done what the people want me to do.

“It is only those that have failed because they have done anything for their people that carry soldiers after leaving office. I don’t have one to follow me. Even if they give me, I won’t take it. I want to move alone.”

In another report, despite the meeting which was held between the presidential candidate of the Peoples Democratic Party (PDP), Atiku Abubakar, and the governor of Rivers state Nyesom Wike in Abuja to resolve the party’s ongoing crisis, it appears the efforts has not yielded any fruits.

Africa Today News, New York reports that since the two leading opposition politicians met in the Abuja home of the former minister of information, Professor Jerry Gana, tempers appear to have flared rather than brought forth answers.

According to reports made public over the weekend, Atiku’s camp may have resorted to organising for the 2023 general elections without the assistance of the Rivers governor, especially in light of the governor’s recent liaison with APC members (APC).

It was reported that some PDP stalwarts from Rivers State met with some party members who were loyal to the former vice president and the PDP candidate. Former state governor Celestine Omehia, former deputy speaker of the house of representatives Austin Opara, and senator Leo Maeba were among those said to have attended the meeting.