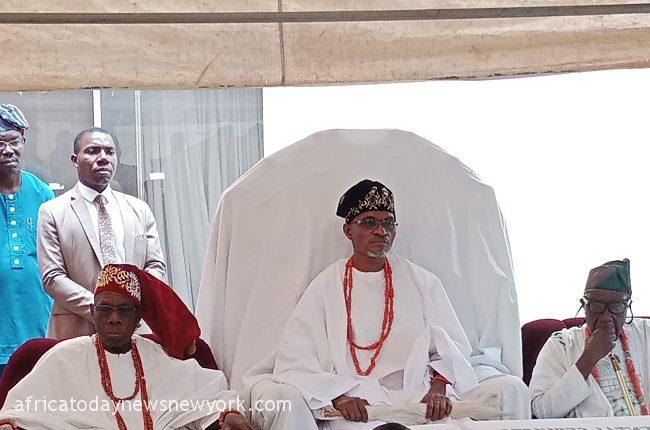 Former President of Nigeria, Olusegun Obasanjo on Thursday encouraged residents of Owu Kingdom in Ogun state to support the new ruler of the old town.
Following the Coronation of the new Monarch, Obasanjo, the Balogun of Owu Kingdom, made supplication to the Almighty saying that he doesn’t want to witness a new Olowu of Owu in Abeokuta, during the remaining years of his life; indicating his wish of longevity for the new ruler.
Soon after the induction of a 300-man planning committee ahead of the coronation procession of the emerging Olowu of Owu, Oba Saka Matemilola, Pa Obasanjo made the statement.
Pa Obasanjo noted that the supplications he made were centered on him being an elderly person to the new ruler and would want to see another Olowu of Owu which implied the death of the new monarch.

Speaking in Yoruba, Obasanjo said, ‘I pray I don’t witness another Olowu of Owu after our new Kabiyesi.’
‘What that means is that Kabiyesi will live long and as an old man, I will not be around when another Olowu will be installed.’
Obasanjo during the induction of the committee which was headed by General, Ekundayo  Opaleye (Retd), implored the entire members of the Central Planning Committee and sub-committees to work sincerely to see the achievement of the said goal
He declared that the Owu kingdom has made a decision to lead by example for the entire South West.
The ex-president implored invited friends of the new monarch and the people of the Owu Kingdom to encourage the new king in ensuring greater development in their homelands.
He said, ‘We are setting standards. The standard will be emulated by people in the South West region. Owu Kingdom is our collective responsibility. We must all cooperate with the new monarch.’
‘I am part of this because we want to incorporate the installation of our new king with our annual Odun Omo Olowu celebration.’
‘We have a lot to do for the development of Owu Kingdom. We want all Owu communities to know that we now have a new king on the throne. We are doing this to ensure that we take care of their interest.’
‘I urged all committee members to work together without any infighting that could stand as a clog in the wheel of progress.’
The Central Planning Committee’s chairman stated that the committee’s membership presented an opportunity for service and for him to be involved in the history made.
Opaleye noted that ‘We have a very big task at hand. You should count yourselves worthy that you a member of the committee for the inauguration of Oba Matemilola.’
‘We are expecting a lot from every member as we need your cooperation and contributions. You must all give all you have to all these committees,’ he said.
Oluwatoyin Jokosenumi, the executive secretary of the Olowu of Owu Coronation Committee, emphasized the new monarch’s ambition and goal for the Owu Kingdom as a whole.
He claimed that the new Olowu was prepared to expand on the accomplishments of his forebears and pave new paths.