What I Told Tinubu When He Visited Me, Obasanjo Opens Up 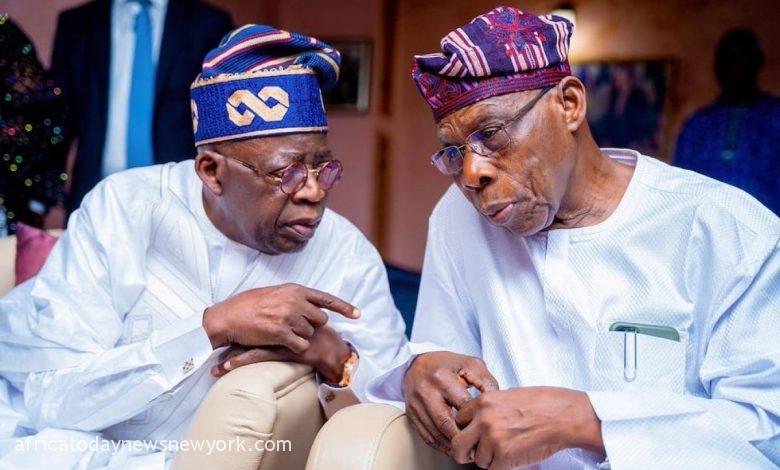 Former President of Nigeria, Olusegun Obasanjo has revealed one of the jokes he made with the Presidential candidate of the All Progressives Congress (APC), Asiwaju Bola Ahmed Tinubu, when he visited him in his Abeokuta residence on Wednesday.

Africa Today News, New York recalls that Tinubu had on Wednesday afternoon visited the ex-president at his Penthouse which is located within the premises of the Olusegun Obasanjo Presidential Library, One Mosan, Abeokuta.

During the visit, Tinubu’s entourage was made up of two former governors of the state, Chief Olusegun Osoba and Otunba Gbenga Daniel, billionaire businessman, Femi Otedola, and former interim national chairman of APC, Chief Bisi Akande, Speaker of the House of Representatives, Femi Gbajabiamila, among others.

Both Obasanjo and Tinubu refused to address the media after their closed-door meeting.

Obasanjo, while speaking at the inauguration of a 300-man planning committee on the installation of the new Olowu of Owu, Oba Saka Matemilola, said he told Tinubu that he had added two phrases to Yoruba vocabularies.

‘I asked Bola and he laughed. I said whether the vocabularies are good or bad, we have started using them.’

Similarly, Femi Gbajabiamila who is the Speaker of House of the Nigeria House of Representatives has finally revealed what had actually transpired at the recent meeting which had occurred between the former president of Nigeria, Olusegun Obasanjo and presidential candidate of the All Progressives Congress (APC), Senator Bola Tinubu.

Gbajabiamila had also in a statement on Thursday while speaking at the Surulere Local Government Area (LGA) APC meeting in Surulere, Lagos revealed that the former President Obasanjo had also made some encouraging statements about Tinubu’s aspiration and even prayed for the APC presidential candidate.

He said, ‘When we were going to Obasanjo’s house, we were eight, including Asiwaju Tinubu; we did not want many people to know about the meeting. So, we were to meet Obasanjo and five others from his side.

‘But when we eventually got there, we met something pleasantly shocking: a mammoth crowd of our supporters were at Obasanjo’s house waiting for us.

He stated that he alongside Chief Bisi Akande, Osoba and Asiwaju were at the meeting and from what Obasanjo said to them, Tinubu’s victory is assured.