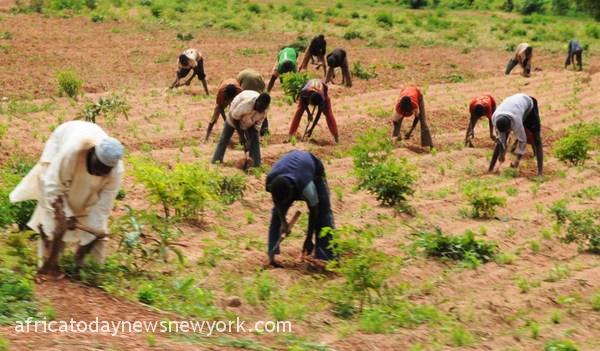 In the face of the concerning security situation in the country at the moment, farmers in Zamfara State have resolved to hold negotiations with the head of the bandit group who are notorious in the state about their safety, seeking their consent to cultivate their farms without the fear of being attacked.
Africa Today News, New York recalls that farmers and dwellers of certain communities in the northern region of the country had earlier revealed that levies are being paid to alleged bandits to exempt them from attacks perpetrated by the terrorists.
The farmers stated that they anticipated meeting the robbers on Saturday as they spoke on behalf of the Zamfara State chapter of the All Farmers Association of Nigeria.
Abdulhafiz Alkali, the Public Relations Officer, AFAN, bemoaned on Thursday, the nonchalance of the Federal Government over the insecurity pertaining the farmers’ vulnerability in the epicenter of the insurgencies.

He noted, ‘What I know about protection with the farmers is just the negotiation between the bandits and the farmers. I am living in Zamfara State now. I know that there will be a meeting by this coming Saturday between the farmers and the bandits.’
‘We lost a lot of things in Zamfara State. We sent letters to the Federal Government to secure us five years ago after complaining that the bandits were disturbing us.’
’We needed the intervention of the Federal Government but it never came. What we lost in the past seven to six years is between N30bn to N50bn on commodities only.’
‘Many people from different countries and states used to come to the Dansadua axis to buy commodities to the tune of over N50b in a year, but now, in a year, we get less than N2bn to N3bn.’
‘In Zamfara State, the commodities business was worth over N200bn to N300bn, but these bandits interrupted the business. We wrote letters, we complained, but up till now, no response from the Federal Government.’
Alkali stated that AFAN had been Neglected by the Federal Government and has not been included in the most recent agricultural products; he said this as regarding the background of the questioning of the House of Representatives on the N18.9b COVID-19 agriculture project spent by the Federal Ministry of Agriculture.
Alkali added that the group has made arrangements to meet with the Ministry of Agriculture to discuss the situation and get clarification.
‘We need between 3,000 and 5,000 (parcels of) arable land, most especially in the North and South-South. For now, there has been no communication between us and the ministry. No member of the All Farmers Association knows about these projects.’
Africa Today News, New York recalls that the House of Representatives Committee on Public Account was recently summoned by the government for an audit inquiry.
The Federal Ministry of Agriculture began a number of programs during the COVID-19 lockdown that cost N18.9 billion, but the Nigerian Young Farmers Network revealed that they did not include them in their activities.
The activities of bandits have been a nightmare to agriculturists in the northern part of Nigeria as they are afraid and vulnerable to attack. The government seems to pay deaf ears to the situation.