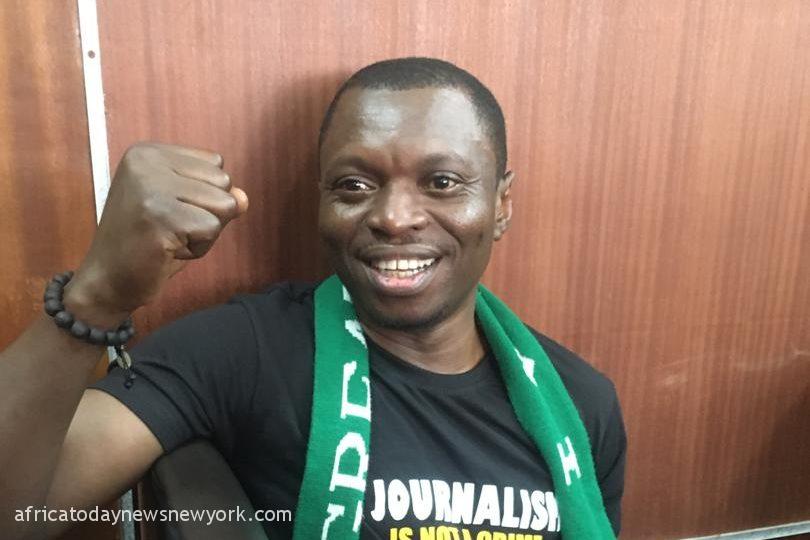 Reports hitting the desk of Africa Today News, New York had it that, Agba Jalingo, journalist and activist who had earlier raised the alarm that his home in Lagos had been surrounded by men of the Nigerian Police force (NPF) is now set to be moved to Abuja.
Africa Today News, New York reports that he was earlier arrested and taken to Alapere Police Station in Lagos.
His claims ere verified by Violet Agba, wife of the detained journalist while speaking to newsmen, on Friday evening.
She disclosed that the activism was scheduled to be moved to Abuja on Saturday morning.
‘They took him to the police station, he will be moved to Abuja tomorrow morning,’ she said.
Jalingo, according to her, was being detained for allegedly defaming the wife of Ben Ayade, the governor of Cross River State’s Brother, Frank Ayade.

‘We asked them for an arrest warrant or charge sheet, but they didn’t present it to us. They only told us that he’s been invited for defamation of character of Frank Ayade’s wife,’ Violet said.
It was gathered that, during the raid to arrest the activist, Jalingo, some security men besiege the Journalist’s Office located in Calabar, Cross River State.
Jonathan Ugbal, the editor of Civic Space at Cross River Watch, revealed this to reporters on Friday night.
‘He will be moved to Abuja tomorrow morning by flight. They also surrounded our office in Calabar earlier on. These were not policemen because when we called the police, those ones ran away,’ he told said.
The publisher of Cross River Watch reportedly shared a series of updates on his Facebook page on Friday afternoon announcing his arrest.
‘I don’t know who sent the police but they have held my wife and my daughter hostage downstairs. I don’t feel safe. Those are their faces’, He shared a photo of some security men at the entrance dressed in muftis on social media.
‘Policemen are still surrounding my house in Lagos. I still don’t know what brought them here. My wife and daughter are held, hostage.’
Africa Today News, New York reports that in Nigeria today, freedom of speech isn’t fully guaranteed. Those in power try to gag the media or whoever is speaking the truth; they label it ‘defamation’ and lock up the party involved.