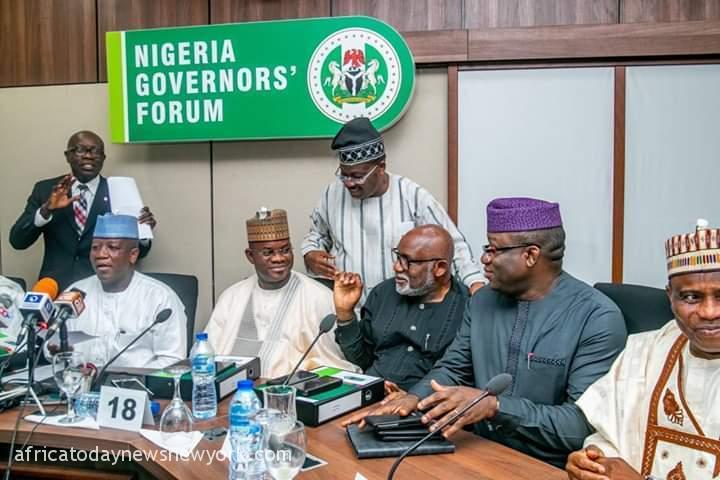 According to the consultants working on the Paris Club repayment, Nigeria Governors Forum (NGF) allegedly asked for and obtained $100 million to oversee elections in several states.
According to the consultants, Governors are the problems Nigeria is facing today
The lead consultant, Mr. Ned Nwoko while addressing a press conference spoke to reporters in Abuja and alleged that when he filed a bill for $350 million as the consultancy fee, the state governors required payment of half of it before it could be recognized.
The money, according to him, was required to oversee the conduct of elections in Bauchi, Ekiti, and Ondo States according to a former chairman of the forum.
He claimed that after the Ministry of Justice got involved, the governors subsequently got paid $100 million.

Nwoko revealed that the money owed to the consultants was $68 million and not $418 million as reported in public space.
Nwoko disclosed that the amount payable to the consultants was actually $68 million rather than the $418 million that had been mentioned in the media.
The consultant went further to say that he and his associates were not linked to the $418 million, which must have been a computation error.
Nwoko stated that the agreements and judgment being executed were reached before the advent of the present administration.
According to Nwoko, the deals and decisions being carried out were made before the present administration took over office.
The NGF Chairman and Governor of Ekiti State, Dr. Kayode Fayemi, was also indicted for being disloyal over the payment of the consultants by the Lead Consultant.
‘For a very long time, the governor of Ekiti State and Chairman of NGF has said so many inconsistent and misleading things. I felt I should restrain myself from joining issues with him’, he said.
‘I am compelled to debunk the litany of lies by the Chairman of Governors Forum.’
While denying the governors’ assertion that there is a Supreme Court ruling against LINAS or himself, Nwoko criticized the NGF for alleging that there is no indemnification, adding, ‘If there is any, I will volunteer to forgo my money.’
Speaking about the accusations by the NGF, he said, ‘It is false that the NGF did not act or represent the state governors over the current round of refund on the Paris Club.’
‘It is also false that past regimes refused to pay the consultancy fees. Refunds started under the Obasanjo regime. If the NGF had paid in accordance with the agreement this would have been averted’, he said.
‘The NGF chairman, Governor Fayemi said there was no court Order of mandamus against the Federal Ministry of Finance and Attorney General. By Court Order dated 21st July, 2021 Federal High Court compelled Finance Minister, DMO DG and HAGF to either pay the value or issue Promissory Notes.’
‘The Governors gave the Federal Government Indemnity.’
‘The 1st Investigation over this matter was at the instance of the HAGF’
‘That the EFCC lacks technical expertise to Investigate this matter,’
‘Claims that states and local governments have not been fully paid notwithstanding that states have been paid $10billion following from the litigation I commenced In 2014 and LGAs $3.1billion following from the litigation I commenced In 2013.’
‘There no court judgment in favour of NGF against either Linas International Limited or Ned Nwoko Solicitors. On the contrary we have judgements against them which they are trying to circumvent by all means.’
However, efforts get responds from the NGF concerning the consultants’ claims were futile.