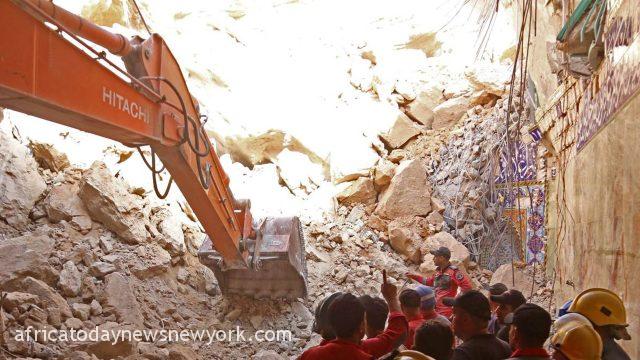 On Sunday, rescue workers searched through the rubble of a Shiite Muslim shrine in central Iraq, following a landslide that left at least five people dead including a child.

‘That could be the final toll,’ he further added while digging has also continued to search for other victims.

It is the latest tragedy to befall oil-rich but poverty-stricken Iraq, which is trying to move past decades of war but is hobbled by political paralysis, endemic corruption and other challenges.

Civil defence spokesman Nawas Sabah Shaker said earlier that between six and eight pilgrims had been reported trapped under the debris of the shrine, known as Qattarat al-Imam Ali, near the city of Karbala.

Africa Today News, New York reports that rescuers drove a bulldozer through the shrine’s entrance, which resembles half a dome ornately decorated with blue tiles covered in Arabic script.

The sacred building, flanked by two minarets, sits at the base of high, bare rock walls. Part of its concrete roof had been torn apart.

Jawdat said rescuers had recovered the bodies of two women, a man and a child, and were working to free the corpse of the fifth victim, another woman whom they had located.

Armed security forces guarded the shrine entrance while rescuers worked inside and onlookers watched from behind a metal fence.

Three children were rescued earlier following the Saturday afternoon disaster, emergency services had said, adding that they were in ‘good condition’ and being monitored in a hospital.

Rescue teams working through the night Saturday were able to provide supplies of oxygen, as well as food and water to some of those trapped through gaps in the rubble, state news agency INA said.

The stricken shrine is dedicated to Imam Ali, the son-in-law of the Prophet Mohammed, who according to Shiite tradition stopped there with his army on his way to a battle in AD 657.

It is located in a natural depression about 25 kilometres (15 miles) west of Karbala, the Shiite holy city which is the burial place of Imam Hussein, grandson of the Prophet Mohammed.

Shiites view Hussein, who died in battle in AD 680, as the rightful successor to the Prophet Mohammed, the issue at the heart of a schism with Sunni Islam.