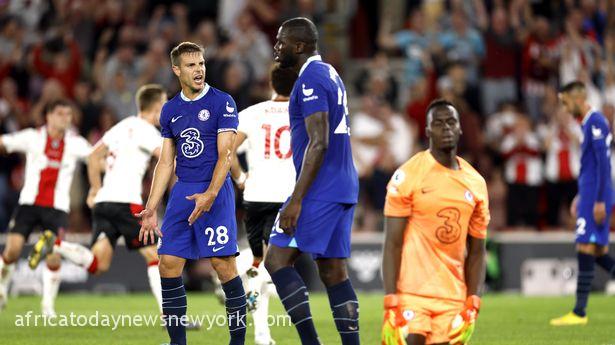 London side, Chelsea on Tuesday night crashed to a shock 2-1 defeat against Southampton as their poor start to the Premier League season took a bad turn in a rather devastating manner.

Thomas Tuchel’s side had thrown away a 1-nil lead at St Mary’s after Raheem Sterling scored to put them ahead midway through the first half.

England forward Sterling bagged his third goal in two games with a close-range strike in the 23rd minute.

However, Chelsea had squandered many scoring chances before Sterling’s opener and, not for the first time in Tuchel’s reign, their profligate finishing came back to haunt them.

Romeo Lavia equalised in the 28th minute with his first goal for Southampton, curling home from the edge of the area after Chelsea failed to clear a corner.

Adam Armstrong put Southampton ahead on the stroke of half-time as he took Romain Perraud’s pass and drilled a deflected shot past Chelsea keeper Edouard Mendy.

Chelsea, beaten 3-0 at Leeds in their previous away fixture, were unable to muster a response as they slipped to a second defeat from their last three games.

With just two wins from their first five matches, the Blues are already five points behind leaders Arsenal, who play their game in hand against Aston Villa on Wednesday.

Africa Today News, New York reports that despite a significant close-season spending spree, which is set to continue with several more signings mooted before Thursday’s transfer deadline, Chelsea are struggling to find any sustained momentum at present.

While it is too early to write them out of the title race, Tuchel will be concerned by his team’s latest sloppy display — with key mistakes at both ends of the pitch — having already criticised them publicly after the Leeds loss.