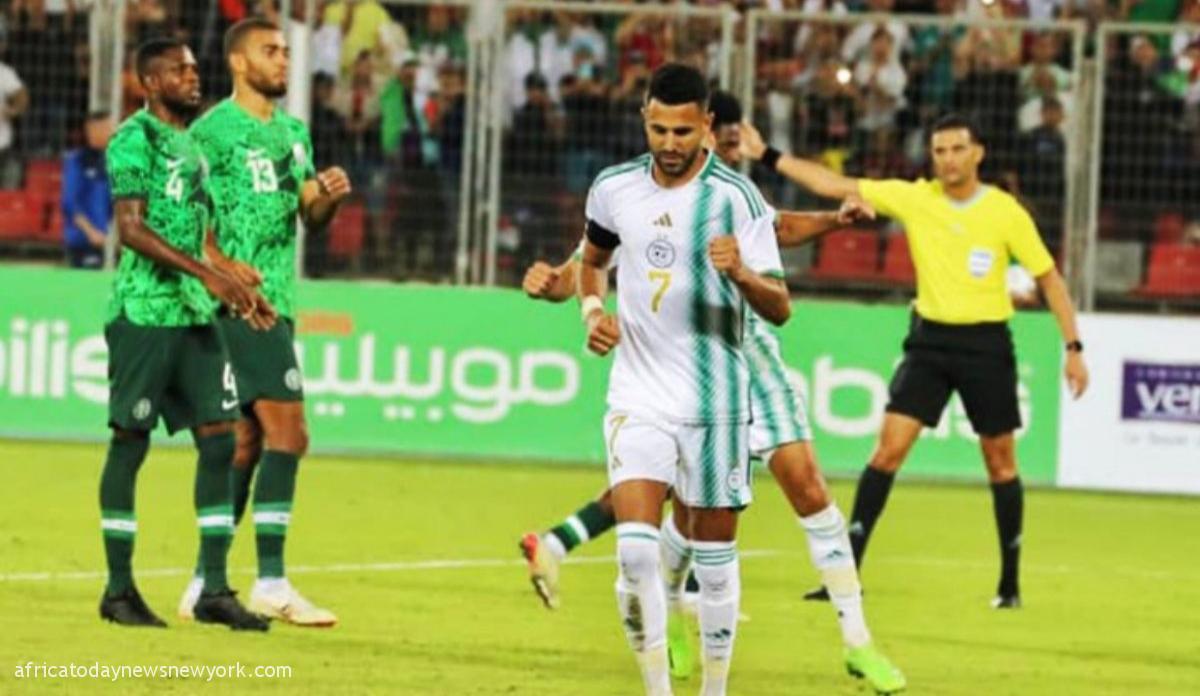 Algeria on Tuesday defeated a Super Eagles side that was in a terrible shape 2-1 in a friendly game which was in Oran.

Africa Today News, New York reports that Nigeria were missing some key players including Napoli forward Victor Osimhen; defender William Troost-Ekong among others for the clash in the North African nation.

However, Jose Peseiro’s men took the lead just eight minutes into the game when Terem Moffi struck for Nigeria. That was his first goal for the country in five games.

Manchester City star Riyad Mahrez levelled things for the Fennecs in the 40th minute when he converted from the spot.

A Youcef Atal cracker, 21 minutes later, condemned the Peseiro to his first defeat to an African side since taking over the team earlier in the year.

While Tuesday’s game is just the second friendly between the nations, Nigeria and Algeria have played 21 times.

They were nine wins for each of the teams while three ended in draws.

Africa Today News, New York recalls that just last week, Nigeria had battled to earn a 2-2 draw with the Algerian home-based side. Both sides did not qualify for the 2022 World Cup in Qatar but the games were expected to get the Nigerian gaffer better acquainted with the players.

William Troost-Ekong, the vice-captain of the Super Eagles had earlier in the week become the latest in the growing injury list.

Troot-Ekong, who on the field for the first time on Friday, sustained an injury that forced him to leave the team entirely.

Troost-Ekong wrote via his twitter handle to confirm his forced departure from the remainder of the tour due to injury: “Unfortunately picked up something in our game yesterday. I’m going back home to deal with it. Best wishes for the lads on Tuesday.

Since moving to Watford from Udinese in the summer of 2020, the 29-year-old defender has made just 54 appearances across all competitions for the Hornets due to injury.

Only three of those came this season, when he has typically been used as a substitute, following a summer transfer window in which he remained at Vicarage Road amid rumours of a transfer to Turkey.

Troost-Ekong hasn’t played frequently for Rob Edwards’ team this year, but he has still demonstrated on numerous times that he is a more than capable alternative for the Hornets.