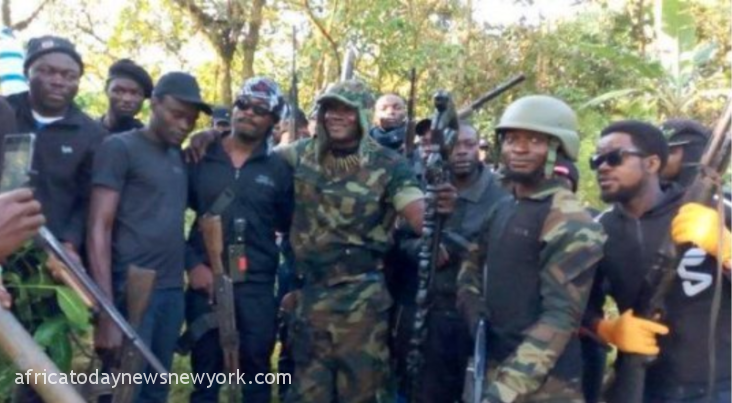 The police authorities in Taraba have confirmed the arrest of the Cameroon Ambazonia commander notorious for terrorising some communities bordering the Republic of Cameroon for many years.

Mr. Abimbola Sokoya who is the Commissioner of Police, made this disclosure during a press conference held in Jalingo to sensitise political party leaders on the need for violence-free polls in the state.

Sokoya pointed out that the arrest of the Ambazonia leader, popularly known as General Bazil, came on the heels of intelligence gathering over the years on his nefarious acts.

‘It is a fact that the Commander of Ambazonia separatist warlords was arrested here in Nigeria,’ the CP said.

‘The antecedent was that he will commit a crime here in Nigeria, he will run to Cameroon, commit a crime in Cameroon and run down to Nigeria. Eventually, through the help of our community there, we were able to arrest him and i give you the assurance that he will be prosecuted.’

These communities have over the years suffered attacks from the Ambazonian separatist rebels of the Republic of Cameroon with the latest on the Manga community which led to the killing of 12 residents, including the traditional ruler of the community.

According to the police, the Cameroonian Ambazonian separatist leader is in their net and an investigation has been launched to arrest other gang members.

He was arrested in the Kurmi Local Government Area of the state and already other Ambazonian rebels are threatening to burn down the community should he not be handed back to them.

The police commissioner also used the opportunity of the press conference to warn against vote buying, thuggery and social vices that could lead to violence, insisting the Command will not tolerate trouble makers in the 2023 polls.

‘We should all abide by the new Electoral Act, avoid all forms of violence. I want to assure that with the step taken by political party leaders here, Taraba will be free of violence, no vote buying, slanderous words by opponents, destruction of political party billboards among others’

‘By virtue of this exercise which is pivoted on the magnanimity of the Inspector General of Police, I want to reiterate here that the fact that we are focusing on election does not mean that we have already suspended or forgotten about our statutory duties in the maintenance of law and order,’ the commissioner added.

Political party leaders present distanced themselves from the arrested Cameroonian Ambazonian warlord, insisting that they will work towards a violence free poll.