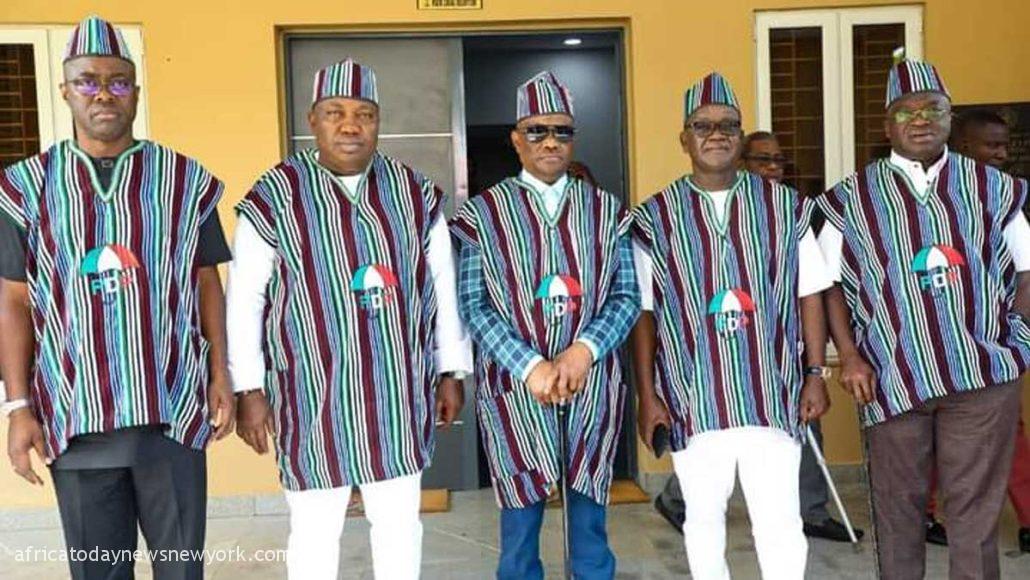 The group of G5 Governors of the Peoples Democratic Party (PDP), have yesterday revealed that they are actually passionate about the country’s workability, while also stressing that they also stand for the peace, unity and also progress of Nigeria.

They had also revealed that integrity, patriotism, equity, fairness and justice were some of important principles which was behind the formation of the group, while they also added that it was not about any particular political party.

The Benue State Governor, Dr. Samuel Ortom had made this disclosure during a cultural night and dinner which had been organised for them by the Enugu State Governor, Ifeanyi Ugwuanyi, at the Government House, Enugu

In a related development, a legal luminary ,Chief Bolaji Ayorinde (SAN), has said Oyo State Governor, Seyi Makinde and other G5 governors were fighting for justice, fairness and equity within the party.

He said the governors were fighting for the future of the party and the country.

The senior lawyer said Makinde has performed excellently as the governor by changing the face of the state with many unprecedented projects and programmes.

Ortom, who appreciated Ugwuanyi for his warm reception, said that the G5 PDP Governors want things to work well in the country.

He added: “Our passion is how can we make things work here in Nigeria by being disciplined. It is not about ourselves; it is not about our ego; it is about what we would do to turn around things and ensure the rule of law, due process and integrity in what we do so that we will have other people visiting us, so that there will be security, so that our economy will be on the right path.”

Pointing out that proffering solutions to Nigeria’s present situation was beyond political affiliation, Ortom harped on the need for all hands to be on deck to make the country work.

“The challenge is that we are going beneath the bottom. But, by the Grace of God, we will all put our hands together. It is not just President Buhari, it is not just about political parties, All Progressives Congress (APC), PDP and others, but it is how we can come together and make things work for our country, Nigeria.

“God has blessed us. We have everything that is needed to make Nigeria not just the giant of Africa but also the giant of the world.”

It would be recalled that Makinde, Wike, Ikpeazu , Ortom and Ugwuanyi have been calling for the removal of the National Chairman of the PDP, Iyorchia Ayu, to pave the way for a Southerner to become the chairman.