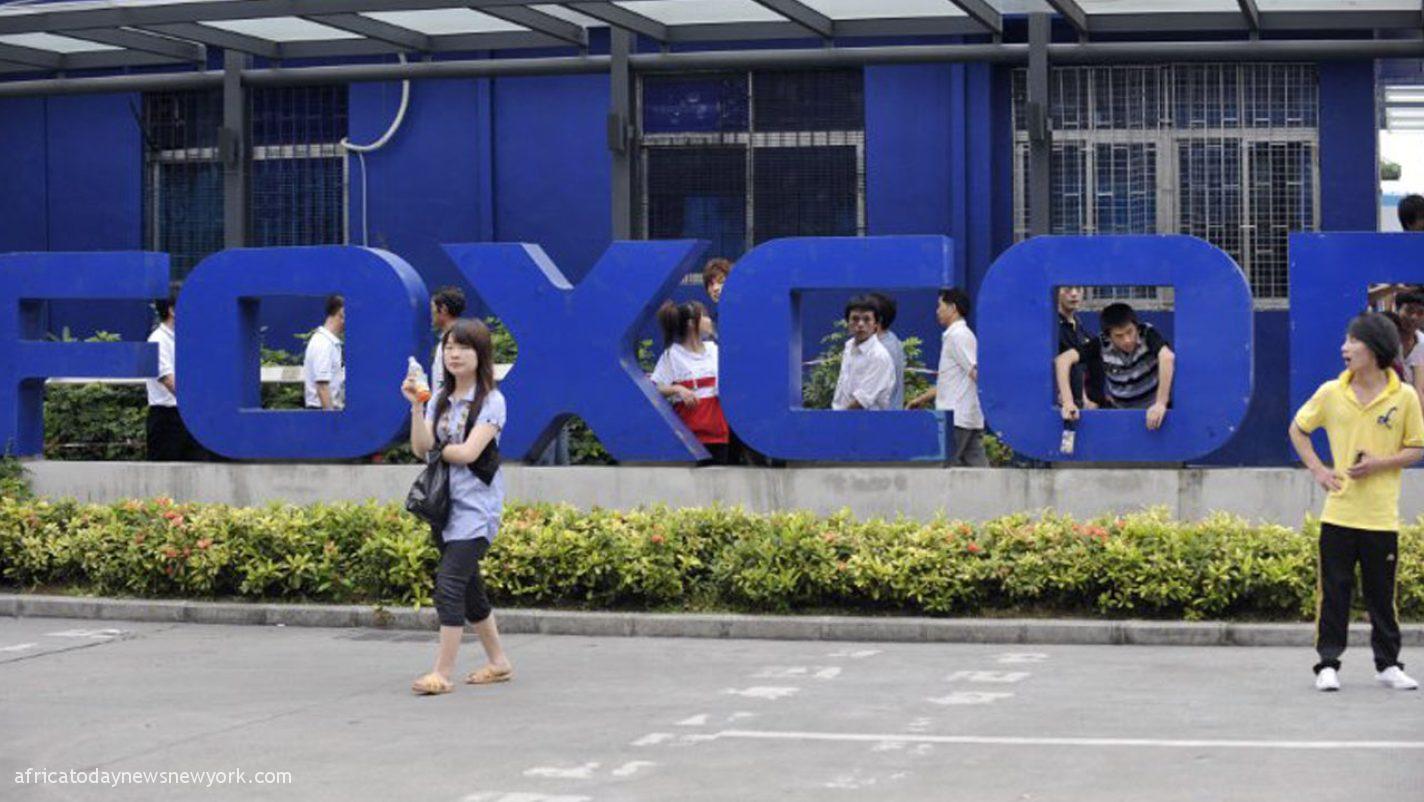 Reports reaching the desk of Africa Today News, New York has that violent protests have erupted around Foxconn’s vast iPhone factory in central China after workers had major confrontations with security personnel over pay and living conditions at the plant.

In a series of videos that have now gone viral on social media, hundreds of workers were sighted marching on a road and confronted by riot police as well as people wearing hazmat suits.

The unrest was confirmed by Taiwanese tech giant Foxconn on Thursday.

Footage captured by a factory worker showed one person lying inert on the ground next to a man in a blood-spattered jacket having his head bound in an apparent effort to staunch a wound.

Another clip shows dozens of hazmat-clad personnel wielding batons and chasing employees, one of whom is knocked to the ground before appearing to be kicked in the head.

The worker who shared the videos estimated that around 20 people were injured in the clashes, some of whom were taken to hospital. He requested anonymity to protect his safety.

The confrontations broke out after employees who signed an agreement with the factory to work at least 30 days in return for a one-time payment of 3,000 yuan ($420) suddenly saw the figure slashed to just 30 yuan, he told AFP.

Many workers were also incensed by “chaotic” living conditions, he said, adding that he “had not received any food” from the company since Tuesday.

Some Covid-negative staff had also been ordered to work alongside colleagues who once tested positive but were not quarantined, the worker said.

Foxconn said workers had complained about pay and conditions at the plant but denied it had housed new recruits with Covid-positive staff at the Zhengzhou factory, the world’s largest producer of iPhones.

The tech giant, Apple’s principal subcontractor, recently saw a surge in Covid-19 cases at its Zhengzhou site, leading the company to shut the vast complex to keep the virus in check.

The huge facility of about 200,000 workers — dubbed “iPhone City” — has since been operating in a “closed loop” bubble.

Footage emerged this month of panicking workers fleeing the site on foot in the wake of allegations of poor conditions at the facility.

Multiple employees later recounted to AFP scenes of chaos and disorganisation at the complex of workshops and dormitories.

The firm has offered large bonuses and other incentives for employees who stayed at the plant as the local government bussed in fresh labourers in a bid to keep it afloat.

Apple this month acknowledged the lockdown had “temporarily impacted” production ahead of the holiday season at the Zhengzhou factory, the Taiwanese company’s crown jewel that churns out iPhones in quantities not seen anywhere else.

Foxconn is China’s biggest private sector employer, with more than a million people working across the country in about 30 factories and research institutes.

China is the last major economy wedded to a strategy of extinguishing Covid outbreaks as they emerge, imposing lockdowns, mass testing and lengthy quarantines despite the widespread disruption to businesses and international supply chains.

The policy has sparked sporadic protests throughout China, with residents taking to the streets in several major Chinese cities to vent their anger.