Wangari Maathai: An African Science Shero You Should Know 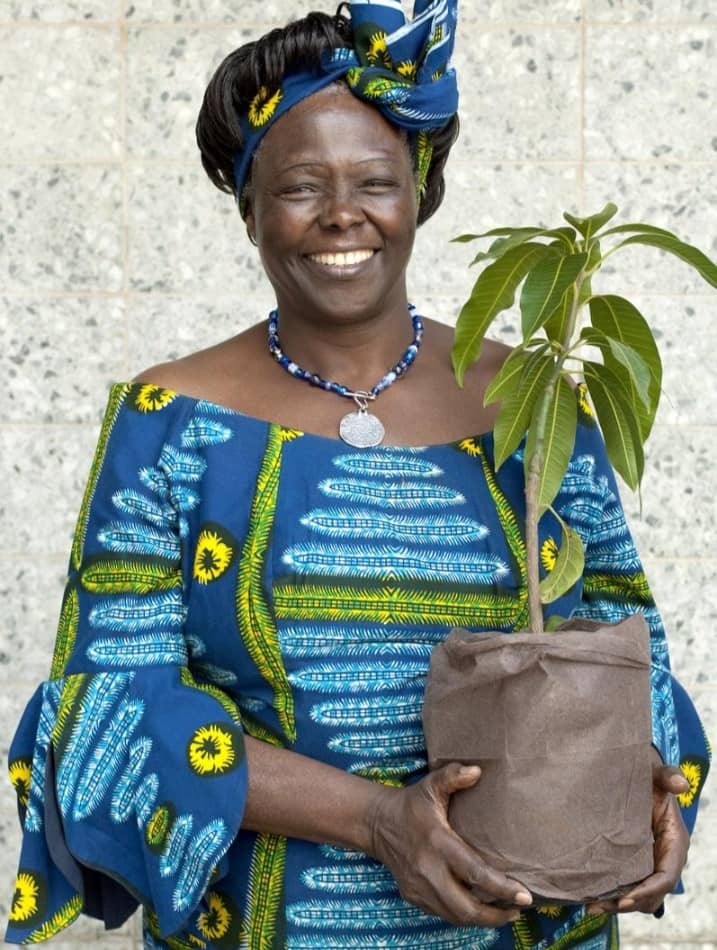 Described by the United Nations as the ‘Woman of trees’, Wangari Maathai, was an environmentalist, human rights activist, and first African female Nobel Peace Prize winner (2004). Schooled in Kenya, America, and Germany, Maathai was also the first African woman to bag a doctorate degree. As a core environmentalist, she continually called global attention to deforestation and other environmental problems caused by poverty. Her passion drove her to found the Green Belt Movement in 1977 with one goal: plant more trees in her home country, Kenya, and empower women while at it. She succeeded in planting 30 million trees in Kenya and went on to influence the United Nations to plan 11 billion trees in the world.

Wangari Maathai had her struggles on both the political and matrimonial front but she maintained that unless there is some sort of balance in wealth distribution, the fight against environmental degradation will not be won. According to her, “Poor people will cut the last tree to cook the last meal…” Many believed she pioneered the establishment of strong ties between conflict, poverty, and the global environmental crisis the world is faced with. She led the way and got pushback from political leaders who called her demeaning names, physically assaulted her to the point of unconsciousness, and voted her out of the parliament. Former Kenyan president, Daniel arap Moi, referred to her as a “mad woman” and described her environmental activism which took the form of protests and empowerment for women as “subversive.”

In spite of these, her protests went on and she ended up empowering 900,000 Kenyan women through sales of seeds and tree-planting responsibilities across the country. As if to compound her ‘woes’, her husband of 10 years (1969 -1979) divorced her for being “too strong-minded for a woman.”  She protested the verdict and called out the Judge for unfairness and corruption. This action earned her half a year in jail. On release, she fired on and kept working to save the environment until the last minute. Even on her deathbed, Maathai spoke up for trees. She had been diagnosed with ovarian cancer and as she battled the terminal disease, she requested not to be buried in a wooden coffin. She spent her lifetime planting trees and did not want her death to mean the loss of yet another tree. What a way to live!

In case you are wondering why she took a special liking for trees. Well, trees are a very important buffer for climate change, they absorb carbondioxide and chlorofluorocarbons (CFC) through a process known as carbon sequestration. The Nature Conservancy puts it in an interesting and simple way thus; “Trees eat greenhouse gases that cause climate change— for breakfast.” Trees take up the carbon we exhale and even those from the exhaust vents of cars. In fact, if the trees in America are optimally managed, they could absorb as much carbon as taking 57 million vehicles off the roads. Trees have much more to offer and like earth’s foot soldiers, they are at the forefront of the battle against climate change.

Maathai was aware of this and was determined to save the earth, one tree at a time. She passed away on 25th September, 2011. I wonder if anyone grieved more than the trees. I share the same perspective with Nnimmo Bassey, Nigerian environmental activist, who commenting on her life and times said, “If no one applauds this great woman of Africa, the trees will clap.” Maathai who was born on 1st April, 1940 in Ihithe, Kenya passed away at age 71 in Nairobi, Kenya. She did not have a perfect life— no one ever did— but she made a bold statement.

Ehi-kowoicho Ogwiji is a storyteller and science writer who advocates for a science-literate Africa. She aspires to be a science development communicator and leader of important conversations around gender imbalances in STEMM (Science, Technology, Engineering, Mathematics, Medicine) in Africa and around the world. She writes from Abuja, Nigeria. Connect with her on social media @ogwijiehi or email her at ehikowoicho.ogwiji@gmail.com