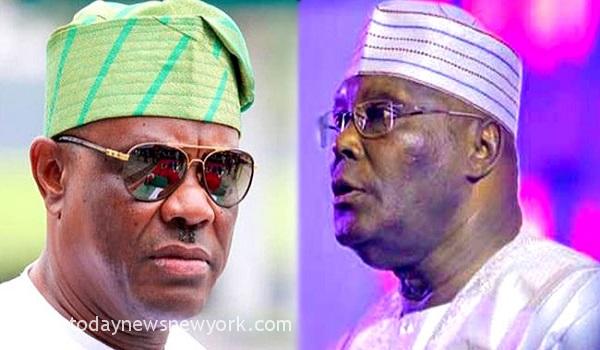 The presidential candidate of the Peoples Democratic Party (PDP), Atiku Abubakar has revealed that he has held meetings on five separate occasions with his rival, Governor Nyesom Wike of Rivers State to resolve the lingering crisis within the party without any solutions.

Atiku stated this on Sunday night during a live discussion on People’s Townhall, a brainchild of Channels Television and its partners.

Asked why he was yet to resolve the month-long imbroglio, Atiku said, “I have met Wike two times in Port Harcourt, two times in Abuja, one time in London, personally.”

“It is not on my part; it is on the other side; I am waiting for him,” he said, without revealing the kernel of his discussions with the Rivers governor.

Atiku was on the programme alongside his running mate, Governor Ifeanyi Okowa.

Wike’s 2023 presidential ambition was terminated when he lost the PDP’s primary to Atiku in May. Atiku, a former Vice President later stung Wike when he passed over his closest rival at the primary and chose Okowa as his running mate.

Wike has since been at loggerheads with PDP presidential candidate (Atiku) over the chairmanship of Iyorchia Ayu. Wike with four other PDP governors known as the G5 or the Integrity Group have insisted that Benue-born Ayu must step down for a southerner as a precondition to support the 2023 ambition of Atiku.

While Wike and his allies have not been seen to campaign for Atiku, it is not clear whether they will support Obi, Kwankwaso or APC’s Bola Tinubu in the contest for Aso Rock’s top job.

The People’s Townhall is primarily anchored on how to sustain Nigeria’s shared democracy. It gives Nigerians a golden opportunity to ask important questions and get specific solutions to the many challenges confronting this nation.