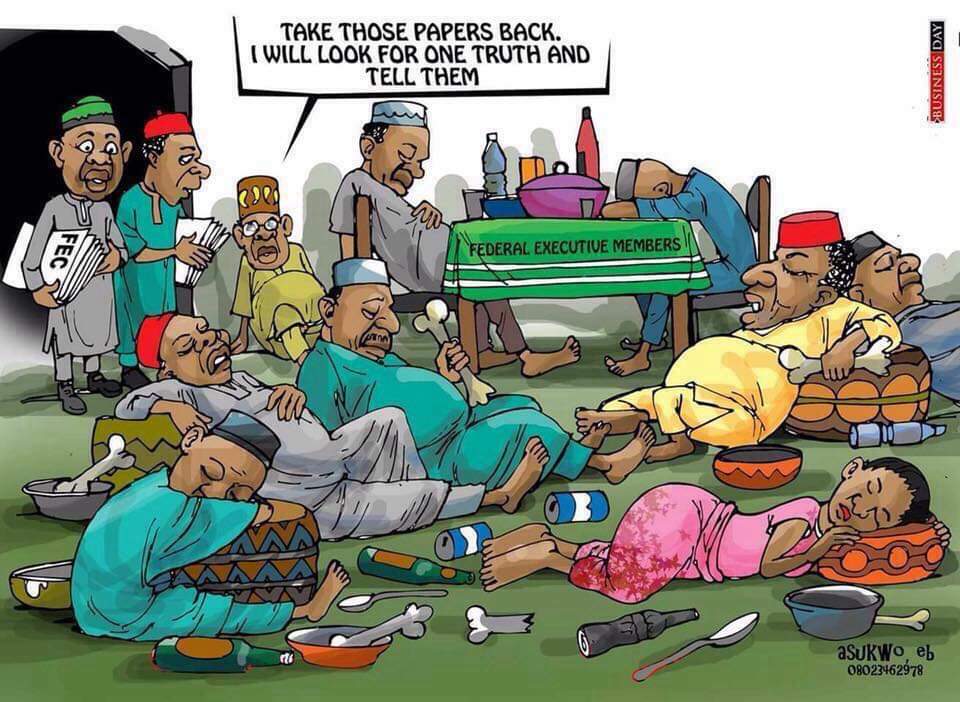 “Dem belly full but we are hungry.
A hungry mob is an angry mob
A rain a-fall but the dirt it tough
A pot a-cook but the food no nough.”

The above song by the legendary international Reggae exponent of blessed memory Bob Marley, readily reminds to us about  affluence of most African politicians generally at the expense of the teeming masses.

Their Bellies are full but the masses are very hungry. Their kids live lavish and Porsche lives but the masses live in agony and full glare of the recession and penury their crude, greed, and incompetent leadership led the continent into.

The pots of Nigerian masses are on fire on daily basis but the food cooked are not enough to quench the hunger of the families. But the families of our politicians know not what hunger is.

Within the past few months, it was a graduation galore for the children of some of these politicians in prestigious foreign universities, while most of the schools in Nigeria are either ill equipped, on strike and generally beyond the reach of the poor.

Buhari’s son graduated from a Uk based university recently. Same Buhari who borrowed money to buy nomination form. Yet one of his first policies was to block cash transfer from Nigeria which greatly affected

Nigerians studying abroad. When asked,he said only those who can afford to sponsor their wards should send them to school abroad.

The same Buhari’s son who recently had an accident with a power bike that was reportedly bought for almost $180,000(USD) and the minister for health convoked a committee in charge of his treatment, while rodents have taken over our public hospitals.

Willie Obiano’s daughter graduated,and millions of taxpayers money were spent on series of graduation parties. To the extent that Flavour N’abania and his musical crew were sponsored to the US to sing on her graduation ceremony. About 179 people were also sponsored by the governor to witness the graduation in the USA.

Saraki’s son graduated too, and he ran to the USA to celebrate his son while the children of poor are denied admission in the name of quota system and the rest.

The likes of Rochas, Dankwambo, to name but a few have kids who graduated abroad. These children of politicians would take up jobs in oil companies, CBN, and other blue- chip companies while children of the masses will end up in Npower and the likes.

Our leaders have vehemently refused to develop our educational institutions, and leave them in perpetual deplorable states because their kids won’t ever go there.

When the politicians get sick, they go to the best hospitals abroad, but when the masses get sick, they die in our ill equipped hospitals. The patients in a hospital were reportedly evicted just to accommodate Buhari’s son who had an accident.

When the masses wriggle out of these difficulties and get home, they will be killed in numbers by the herdsmen in their sleep, while the children of the politicians will be walking around with armed security.

Nigerian masses have been suffering from time immemorial and we are all now used to the suffering. In all these things, the children of the politicians don’t experience these sufferings.

One brazen fact about the Nigerian politicians is that they don’t even care about the masses, the only thing that is most important to them is lining their pockets and amassing wealth for their generations to come.

They have perfected ways of taming the hungry youths and nipping their revolution in the bud by buying them over during the election, because food is very essential for the hungry.

The Nigerian political scenario is one where the politicians and elected representatives expect the masses to serve them, rather than them serving the masses.

The only happy people in Nigeria are the politicians. The youths have seen the deception of our so called leaders and they are not ready to take it again. There have been wide reports, and 2019 election is determining factor.