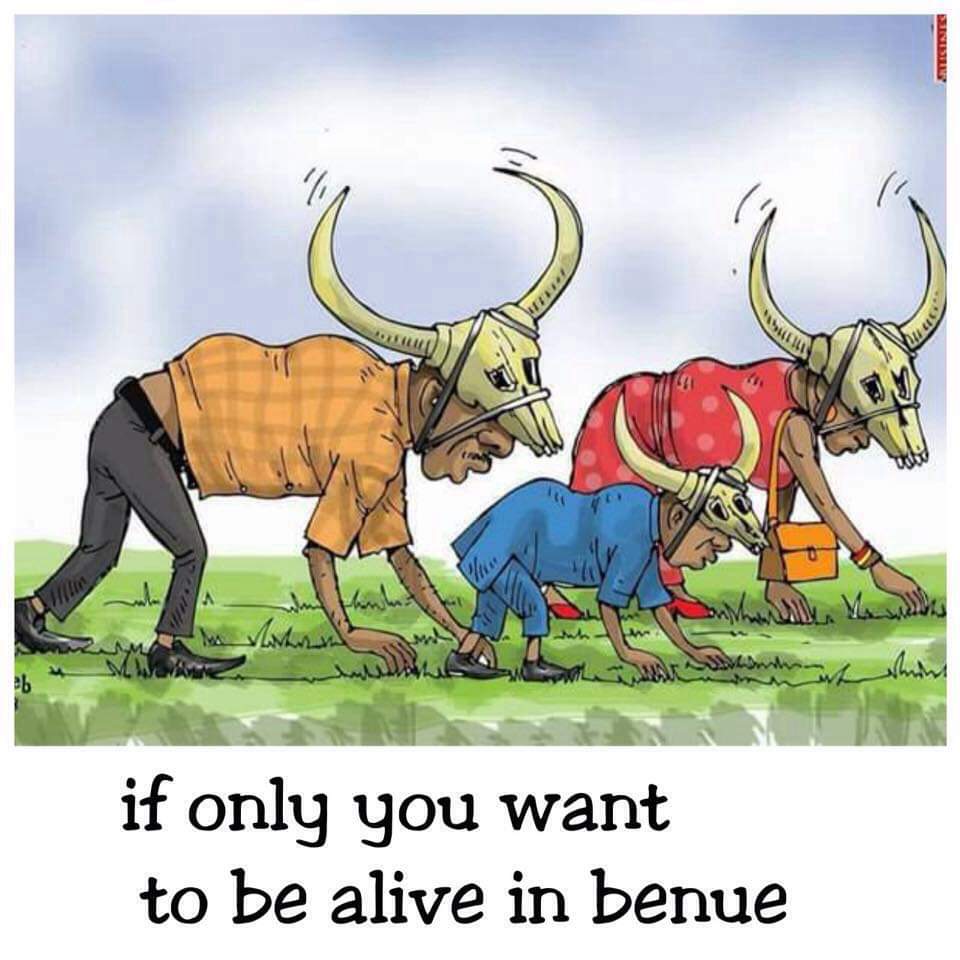 By People And Polity

Fulani herdsmen were meant to be ordinary nomads who practice the age long tradition of taking  their cattle for grazing on green pastures. They were hitherto armed with their sticks with which they control these animals.

As soon as Buhari won elections in 2015, the herdsmen allowed their cattle on highways to be grazing and even in the FCT roads where ther are no grasses.

Their cattle started using pedestrian flyovers.
They started taking them into schools and even forcing pupils out of classrooms.

In recent times in Nigeria, Fulani herdsmen have metamorphosed into a very deadly Islamic terrorist sect, and a military arm whose sole aim is jihad.

The World Terrorism Index has ranked them the 4th deadliest terrorist organization in the world, just behind Isis, Al Qaeda, and Boko Haram.

The sticks with which they herd their cattle have turned into AK47 rifles and other automatic weapons.

They have been on killing spree, maiming, raping, burning and looting all the way. There are a lot of disturbing video and photo evidences of their killings. They kill in such a barbaric way that abattoirs would be described as sacred places.

They cut open pregnant women and chop the babies into pieces. They cut innocent children as if they were chopping onions to cook with.

They rape women till they die. They disembowel adults and leave them sprawling all over the place. And cut the penises of men and gorge out their eyes. They have no regards for human lives.

In some of the videos, they unleash their herds of cattle to eat up farm produce of farmers. In some others, they slice yams preserved in the farmlands for their cattle to feed on, and after that burn the leftovers.

In all these, the Buhari/Jubril  led APC government have strongly supported them and refused to bring them to book.

They have refused to bring these murderous people to book, even when they have publicly threatened the peace and security of the country, and when evidence of their killings abounds.

The presidency has rather defended their killings.
They once told Nigeria and even the international community that these herdsmen were not from Nigeria, but trained and armed by Gaddafi of Libya to be killing people in Nigeria.
By that, he unintentionally said that Nigeria cannot protect its people from external aggression.

When they struck in Benue, Buhari in his bid to protect his herdsmen brothers asked governor Ortom to try and accommodate his brothers.

Meanwhile, when Ortom kept shouting on top of his voice about the killings going on in his state, it was reported that at a council of state meeting, President Buhari walked past Governor Samuel Ortom, refused to shake his hand, looked him in the eye and asked, “How are your cattle rearers?” with a big smirk on his face.

In recent times, the Presidency has also told Nigerians that it’s better to give up their lands to Fulani herdsmen than to lose their lives.

There were reports of the military, police and other security agencies standing down their commands in any location the herdsmen wants to attack, till the attack is over.
Then the commands will take over mop up operations, as they will arrest the people planning reprisals on the herdsmen.

It has also been alleged that serving and retired military, police, other security agents, and northern politicians own the cattle these herdsmen rear and are the ones who arm them.

There were instances where no herdsman was arrested after they carried out a particular carnage in Benue state, but as soon as two herdsmen were killed by angry mobs, security forces swung into action and arrested everybody they could see around.

In some of the videos, guns and magazines painted in police colors were being brandished by the state sponsored terrorists.

There has been cases where the herdsmen were arrested by mobs and taken to the police station, only for the police to set them free and detained the people that brought them.

Buhari once attested to the fact that his security chiefs doesn’t obey him, as he sent the Inspector General of police to Benue to take care of the herdsmen killings, but instead he moved to Nassarawa without his notice.
He gave that as the reason why Benue killings worsened at that particular time.

The Inspector General of police had already given reasons why he won’t arrest the herdsmen despite their killings as he argued the governor’s must establish ranches, before the herdsmen can be arrested.
Even when the identity card of a herdsman was found at the scene of one of the killings, the security agencies turned a blind eye.

From Nimbo, to Taraba, Benue, Nassarawa, Jos, Southern Kaduna, Zamfara and everywhere Fulani herdsmen has killed, if you look deeper you will definitely see the hand of the Buhari/Jubril  led APC government urging them on and protecting them.