The Fulani Herdsmen Carnage And The Nigerian State

There are two distinct types of Fulani people namely : Nomadic Fulani or Pastoralist; they are the ones who herd cattle and move from one place to the other.

The second one are called, The Settlers: they are the ones who don’t move around with their cattle but settle down in a place. These are often the educated ones who are mostly found in government circles, politics, military and other spheres of life. They are the owners of the cattle being herded by their Nomadic brothers.

The difference between these two is that while the nomads move around, and are poor and not educated, the settlers are very rich, educated and settle in highbrow areas. Apart from that they have every other thing in common.

The herdsmen carnage in Nigeria can be traced back to the invasion, conquering and forming of a caliphate by Usman Dan Fodio.

Usman Dan Fodio conquered the Hausa, Birom, Nupe, Tiv and even the Yoruba of Ilorin. He unseated their rulers and foisted on them his people as emirs. All these things happened just the same way it’s happening now.

A review of the quote by Alhaji Tafawa Balewa during the pre independence Nigeria lends credence to the Fulani carnage.

Hear him, “I should like to make it clear to you that if the British quitted Nigeria now at this stage the Northern people would continue their interrupted conquest to the sea.”

When you look at the words of Sir Ahmadu Bello, the Sardauna of Sokoto  who is a descendant of Dan Fodio prior independence, you will clearly understand that Fulani herdsmen are on a mission which is: CONQUEST.

“The new nation called Nigeria should be an estate of our great grand father, Othman Dan Fodio. We must ruthlessly prevent a change of power. We must use the minorities of the north as willing tools & the south as conquered territories; and never allow them to rule over us or have control of their future!”
-Sardauna of Sokoto, Sir Ahmadu Bello , Oct 12 1960.

The current president of Nigeria and the grand patron of Miyetti Allah had these to say about Sharia in August 2001:

“I will continue to show openly and inside me the total commitment to the Sharia movement that is sweeping all over Nigeria”.

“God willing, we will not stop the agitation for the total implementation of the Sharia in the country,” Buhari said.

“What remains for Muslims in Nigeria is for them to redouble their efforts, educate Muslims on the need to promote the full implementation of Sharia law,”

El rufai even bragged of the killing prowess of the Fulani people on Twitter when he said: 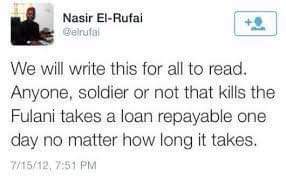 “We will write this for all to read. Anyone, soldier or not that kills the Fulani takes a loan repayable one day no matter how long it takes.”

From the foregoing, Nigerians most especially the millennial and those who never pay attention to history should know that these incessant killings by the herdsmen did not start today.

They even had to smuggle grazing law into the constitution and gave themselves every  land where they graze their cattle. That’s why they start killing their host communities after some time of grazing in their lands.

They are tools of jihad and they are continuing the conquest from where their great grandfather stopped.

Even when The Global Terrorism Index classified Fulani herdsmen as the 4th deadliest terrorist group in the world, the Nigerian government are still protecting them and said that their act of violence is not terrorism.

They rather proscribed IPOB that never killed anyone while protecting the herdsmen that wield automatic weapons.

To further lend credence to these. Why didn’t we hear much about the carnage of the Fulani herdsmen when Goodluck Ebele Jonathan was the president?

It was because he didn’t spare them, as he rightly deployed security agencies to curb their bloodlust and nip it from the bud.

This is one of the reasons why the Fulani hated GEJ with passion and did everything to oust him.

As soon as Buhari took over power, his herdsmen brothers took their cattle to the major streets of Abuja and other states where there are no grasses, just to tell the world that they have taken over.

In some cases, they took their cattle to cross pedestrian flyovers and at some points had to displace children from their classrooms with their herds of cattle.

As soon as Buhari took over, the herdsmen started killing with reckless abandon. From Southern Kaduna, to Plateau, to Agatu, to Nimbo, Adamawa,  and Taraba .

In all, Buhari had always been indifferent and had never condemned the killings carried out by his people.

Another dimension to the Fulani domination is that Buhari tactically and systematically made sure that the heads of almost all the security agencies (military and paramilitary) in Nigeria were Hausa/Fulani people. From the police, DSS, Army, Airforce, immigration, to prisons .
sure there is no reprisals from the victims.

For those of you who are waiting for the Buhari led APC government to condemn, arrest and prosecute Fulani herdsmen, think otherwise because they are state sponsored and are on conquest mission!

Each and every attack carried out by these herdsmen are sanctioned by their rich men in authority.
From Governors, ministers, Military high commands, oil magnates, police high commands, etc.
That’s why you will never hear that security agencies accosted them while on their killing spree.